Kids Encyclopedia Facts
This page is about the museum in Palo Alto, California. For the museum in Stow, Massachusetts, see American Heritage Museum.

The Museum of American Heritage (MOAH) is a museum in Palo Alto, California. It is dedicated to the preservation and display of electrical and mechanical technology and inventions from the 1750s through the 1950s. The museum has a large collection of artifacts that are generally not accessible to the public. Selections from the collection are displayed in a historic house at 351 Homer Ave, Palo Alto, California. MOAH is a 501 (c) (3) non profit organization and a member of the American Alliance of Museums.

At the time of his death, the Livermore Collection of consisted of approximately 1,000 artifacts. A trust was established by Frank Livermore to preserve and display this collection to the public. As of 2019, the MOAH collection has over 6,000 accessioned artifacts.

Edison Louis XV brand phonograph. According to the placard, only 60 were made and cost US$425 in 1912.

Five rooms containing rotating exhibits that change several times per year. Exhibits contain artifacts selected from the museum collection and/or from local collectors. Prior exhibits include:

Permanent exhibits in six rooms of the Williams House include: 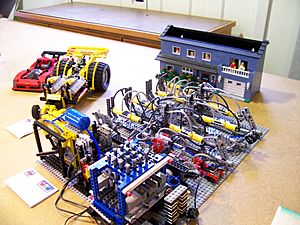 The museum has a mission to collect and preserve artifacts, electrical and mechanical in nature, that were invented or built from the 1750s through to the end of the 1950s. The museum accepts donated artifacts that meet these criteria for inclusion in the collection.

The MOAH collection is housed in a remote warehouse and is seldom open to the public. Categories typical to the collection include: sewing machines, mechanical typewriters, cameras, radios and televisions, clocks, toys, adding machines and mechanical calculators, and kitchen appliances. There are over 5,000 accessioned artifacts in the collection and many more that are display items, extras, or permanent loan items. It is reported to be one of the largest collections of its kind in the United States.

Items from the collection are used for MOAH permanent and rotating exhibits. Other museums and institutions are able to borrow items from the MOAH collection for their exhibits or other displays. Organizations that have borrowed exhibit materials from MOAH include the San Francisco International Airport museum, the Los Altos History Museum, San Jose State University theater department, and the Stanford Federal Credit union.

The museum collection database is currently only accessible during public hours at the main museum location in Palo Alto.

The Museum of American Heritage is currently open to the public in the Williams House on Homer Ave. in Palo Alto. This house was custom built in 1907 by Dr. Thomas Williams for his residence and private medical practice. Dr Williams is noted for having opened the first doctors office in the Palo Alto area. The house is a Tudor Revival design, and the architect was Ernest Coxhead. The house was owned by the Williams family until the death of the last living daughter of Thomas and Dora Williams. The house was bequeathed to the city of Palo Alto to be used for the community benefit.

In 1997, Palo Alto asked for request for proposals of how to use the property. The city selected the Museum of American Heritage proposal, and after a significant restoration the museum opened its doors to public in 1998. Significant features of the Williams house include:

The Williams house is currently on the Palo Alto Historic Inventories list as a Class 2 Palo Alto Historic building. The building behind the main house (labeled "Livermore Learning Center") is a new structure and is located where a small family orchard was originally located.

Path in the backyard garden

Early photographs of the Williams' property show an open vista with an unobstructed view of the house, the beginnings of landscape, and only a few native trees. But Dora Williams' interest and proficiency in gardening developed along with her garden until it reached a height of complexity in the 1920s and 1930s. Her extensive notes on the garden document the garden development over the years, and have allowed the garden to be restored to its original state.

Unlike many public specimen gardens, this garden was (and remains) representative of an early 20th Century residential landscape. Featuring "outdoor rooms" delineated by rock walls and border plantings and punctuated by ornamental fountains and ponds.

At the same time the garden area served the more utilitarian functions required by the Williams family, such as a vegetable garden, a medicinal plants garden, clothes drying, and composting. It is attributed to be the only historically preserved landscape in Palo Alto, and one of the few in California. The Museum of American Heritage is currently preserving the Williams House Garden.

All content from Kiddle encyclopedia articles (including the article images and facts) can be freely used under Attribution-ShareAlike license, unless stated otherwise. Cite this article:
Museum of American Heritage Facts for Kids. Kiddle Encyclopedia.