Musselburgh Racecourse is a horse racing venue located in the Millhill area of Musselburgh, East Lothian, Scotland, UK, close to the River Esk. It is the second biggest racecourse in Scotland (the first being Ayr) and is the fourteenth biggest in the UK. In 2016, Musselburgh will stage 28 fixtures.

The course offers both flat racing and National Hunt meetings (though it only introduced jumping in 1987) and is 2 km long. In the middle of the course is a nine-hole golf course, Musselburgh Links, dating from at least 1672. The Royal Musselburgh Golf Club was founded there in 1774. 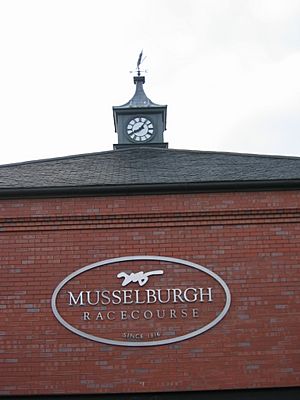 The racecourse itself sits on Musselburgh common good land. It is situated on the eastern side of the town, less than a mile from the A1 and two miles from the Edinburgh City Bypass. A road bridge over the Esk gives access to the course on race days only; the rest of the time, the gates are kept closed.

The first races in Musselburgh took place in 1777 under the auspices of the Royal Caledonian Hunt. Between 1789 and 1816, race meetings were held on the sands at Leith, although some races did still take place in the town. In 1816, they returned permanently to Musselburgh, to a course that had been laid out for them by the town council. The Hunt were so pleased with the new course that they distributed 50 guineas amongst the town’s poor.

After the legalisation of off course betting shops in 1961, racecourse attendances went into decline. This hit Scotland particularly hard, with Lanark and Bogside racecourses both going bankrupt. By the 1980s Musselburgh looked to be heading the same way, and, despite a temporary financial reprieve in 1987 when racecourses began to sell pictures of races to the betting shops, it was still losing money at the start of the 1990s. 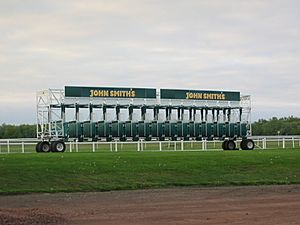 From 1995 onwards, a £7.5 million refurbishment plan was put in place. This included a prestigious new hospitality stand (The Queen’s Stand), the refurbishment of the Edwardian Grandstand, the building of the Links Pavilion, a new weighing room and entrance complexes, a new parade ring, new stables and groundstaff facilities, extensive landscaping and improvements to the track itself.

In 2012 an all weather strip was introduced to the track to prevent the bends being chopped up. 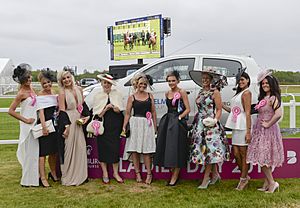 In 2011, Musselburgh won the Dual Purpose Award at the Neil Wyatt Racecourse Groundstaff Awards, beating the much bigger Ascot Racecourse into second place. Musselburgh Racecourse have also won a range of awards through the RCA Showcase Awards.

All content from Kiddle encyclopedia articles (including the article images and facts) can be freely used under Attribution-ShareAlike license, unless stated otherwise. Cite this article:
Musselburgh Racecourse Facts for Kids. Kiddle Encyclopedia.