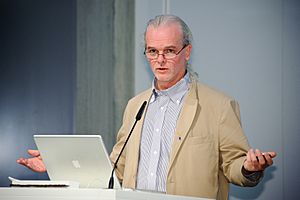 Mycle Schneider (born 1959 in Cologne) is a German energy consultant, and lead author of The World Nuclear Industry Status Reports. In 1997 he received the Right Livelihood Award.

Mycle Schneider is a nuclear energy expert based in Paris who has been adviser to members of the European Parliament on energy issues for more than 20 years. From 1998 to 2003, Schneider advised on energy policy for the French environment minister's office and the Belgian minister for energy and sustainable development. Since 2000 he has been a consultant on nuclear issues to the German environment ministry. He has also provided energy consulting for the International Atomic Energy Agency.

Schneider is a member of the International Panel on Fissile Materials, and the nuclear non-proliferation group Independent Group of Scientific Experts (IGSE), which is based at Hamburg University. Since 2004 he has overseen the Environment and Energy Strategies lecture series for the Environmental and Energy Engineering Program at the French École des Mines in Nantes.

In 1997, along with Jinzaburo Takagi, Schneider received the Right Livelihood Award “... for serving to alert the world to the unparalleled dangers of plutonium to human life.”

Schneider writes many publications on the safety and economic trends of the nuclear industry. He is co-editor of the 2009 book International Perspectives on Energy Policy and the Role of Nuclear Power. His World Nuclear Industry Status Report 2009 was published by the German government. Schneider and Antony Froggatt wrote the Systems for Change report for the Heinrich Böll Foundation in 2010. Also in 2010, Schneider wrote a chapter in the book Nuclear Power’s Global Expansion: Weighing Its Costs and Risks. He has commented extensively on the implications of the 2011 Fukushima nuclear disaster.

All content from Kiddle encyclopedia articles (including the article images and facts) can be freely used under Attribution-ShareAlike license, unless stated otherwise. Cite this article:
Mycle Schneider Facts for Kids. Kiddle Encyclopedia.