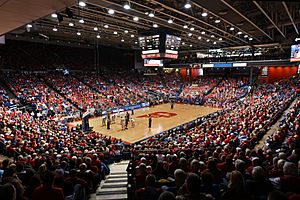 The University of Dayton Arena, which has hosted all First Four games since the round's inception in 2011, as well as its precursor, the single "play-in" game held from 2001 to 2010. As of 2017, the arena has hosted 115 tournament games, the most of any venue.

The NCAA Men's Division I Basketball Championship, or NCAA Tournament is a single-elimination (if you lose a game, you stop playing) college basketball tournament with 68 college teams playing each other. The National Collegiate Athletic Association (NCAA) created it in 1939. When it was started in 1939, it only had eight teams. It has grown slowly, but steadily.

The tournament is played from mid-March to early April, so basketball around that time is sometimes called "March Madness".

The tournament is split into four groups called regionals. Each regional has 17 teams, seeded (numbered from best to worst) 1 through 17. The 16 and 17 seeds play each other at the beginning. Then the 1 seed plays the 16 seed, the 2 seed plays the 15 seed, and so on. Then the winners advance to the next round. There are six rounds.

The following is a list of all schools that have won at least one NCAA Men's Basketball Tournament, along with the year(s) in which they won their championship(s).

All content from Kiddle encyclopedia articles (including the article images and facts) can be freely used under Attribution-ShareAlike license, unless stated otherwise. Cite this article:
NCAA Men's Division I Basketball Championship Facts for Kids. Kiddle Encyclopedia.