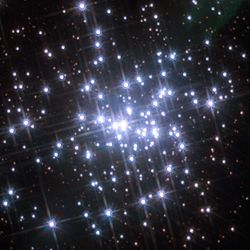 B is the brightest star just left of the three barely-resolved A parts at the centre in this HST image of the central region of HD 97950.

NGC 3603-B (HD 97950B) is a Wolf-Rayet star located at the centre of the HD 97950 cluster in the NGC 3603 star-forming region. It is about 20,000 light years from Earth. It has the spectral type of WN6h and is among the most luminous and massive stars known. WN6 indicates that there are ionized nitrogen lines that are strong in comparison to the ionized carbon lines. NGC 3603 is 132 times the mass of the Sun. It has a luminousity of 2,900,000. Although the star is very young, 1.5 million years old, it has lost a considerable fraction of it's initial masses.

All content from Kiddle encyclopedia articles (including the article images and facts) can be freely used under Attribution-ShareAlike license, unless stated otherwise. Cite this article:
NGC 3603-B Facts for Kids. Kiddle Encyclopedia.