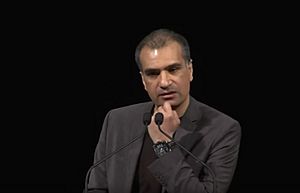 Aslam was born in Gujranwala, Pakistan. He moved to the United Kingdom with his family when he was 14.

His debut novel, Season of the Rainbirds (1993), about the culture of rural Pakistan, won the Betty Trask and the Author's Club First Novel Award.

All content from Kiddle encyclopedia articles (including the article images and facts) can be freely used under Attribution-ShareAlike license, unless stated otherwise. Cite this article:
Nadeem Aslam Facts for Kids. Kiddle Encyclopedia.