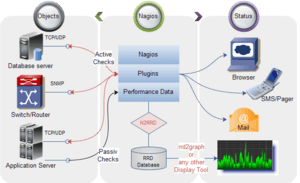 Nagios is a popular open source computer system and network monitoring application software. It watches hosts and services which the owner specifies, alerting the owner when things go bad and again when they get better.

Nagios, originally created under the name NetSaint, was written and is currently maintained by Ethan Galstad, along with a group of developers actively maintaining both official and unofficial plugins.

Nagios was originally designed to run under Linux, but also runs well on other Unix variants.

Nagios is free software licensed under the terms of the GNU General Public License version 2 as published by the Free Software Foundation.

All content from Kiddle encyclopedia articles (including the article images and facts) can be freely used under Attribution-ShareAlike license, unless stated otherwise. Cite this article:
Nagios Facts for Kids. Kiddle Encyclopedia.