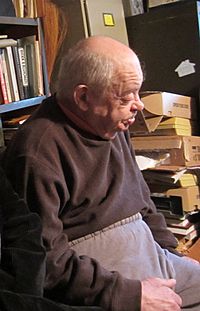 Nahum (Naum) Moiseyevich Korzhavin (Russian: Нау́м Моисе́евич Коржа́вин; real surname Mandel, Russian: Мандель; 14 October 1925 – 22 June 2018) was a Russian-American poet. He was born in Kiev of Jewish descent, He worked and lived in Boston, Massachusetts during most of his career. In 2005 Korzhavin participated in They Chose Freedom, a four-part television documentary on the history of the Soviet dissident movement. He wrote many memoirs and novels about dissidents.

All content from Kiddle encyclopedia articles (including the article images and facts) can be freely used under Attribution-ShareAlike license, unless stated otherwise. Cite this article:
Nahum Korzhavin Facts for Kids. Kiddle Encyclopedia.