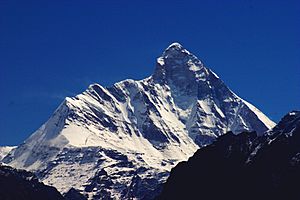 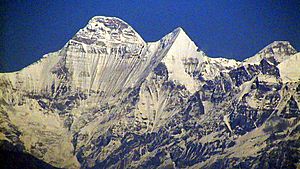 The southwest side of Nanda Devi photographed from Sassanian

Nanda Devi is the second highest mountain in India, and the highest located entirely within the country. (Kangchenjunga, which is higher, is on the border of India and Nepal.) It is the 23rd-highest peak in the world.

The peak, whose name means "Bliss-Giving Goddess", is regarded as the patron-goddess of the Uttarakhand Himalaya. 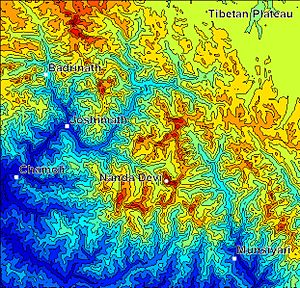 From 1965 to 1968, attempts were made by the Central Intelligence Agency (CIA), in co-operation with the Indian Intelligence Bureau (IB), to place a nuclear-powered telemetry relay listening device on the summit of Nanda Devi. This device was designed to intercept telemetry signals from missile test launches conducted in the Xinjiang Province, at a time of relative infancy in China's missile program.

The expedition retreated due to dangerous weather conditions, leaving the device near the summit of Nanda Devi. They returned the next spring to search for the device, which ended without success. As a result of this activity by the CIA, the Sanctuary was closed to foreign expeditions throughout much of the 1960s. In 1974 the Sanctuary re-opened.

All content from Kiddle encyclopedia articles (including the article images and facts) can be freely used under Attribution-ShareAlike license, unless stated otherwise. Cite this article:
Nanda Devi Facts for Kids. Kiddle Encyclopedia.