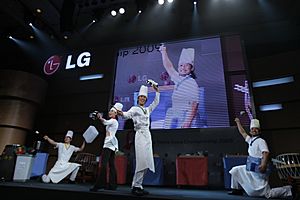 A Nanta performance at the LG Life Tastes Good Championship, in Bangkok, 2009

Nanta is a popular Korean musical. It is a non-verbal performance using the traditional Korean "Samulnori" rhythm. This musical was first performed in 1997.

Nanta received an award for Best Performance at the Edinburgh Fringe Festival in 1999. Since then, it has been performed successfully in many foreign countries. In 2004, Nanta opened a long running show on Broadway, in New York, a first for an Asian musical.

Nanta is presented through music and motions, so there is no language barrier. This musical combines traditional rhythms of Korean samulnori with modern musical forms including rock music and jazz. This musical creates unique but familiar experience to a world audience. It is a comedy where everyone in the audience can join in the performance. The audience interacts with the performers in many ways.

All content from Kiddle encyclopedia articles (including the article images and facts) can be freely used under Attribution-ShareAlike license, unless stated otherwise. Cite this article:
Nanta Facts for Kids. Kiddle Encyclopedia.