Nara Visa is a census-designated place in Quay County, New Mexico, United States. Although it is unincorporated, it has a post office, with the ZIP code of 88430. The population of the ZCTA for 88430 was 112 at the 2000 census.

Nara Visa traces its beginnings to brothers Sim and Fred McFarland of La Veta, Colorado. The brothers originally came to New Mexico to work on their uncle's cattle ranch. When word came that the Rock Island Railroad would be building a track through the area, the McFarlands moved to a location near the proposed route. The community was first known as Narvaez, named after the Narvaez family, who lived in the area in the 1880s. English-speaking settlers changed the name into its current name Nara Visa.

Henry F. King came to the site in November 1901 to be the first section foreman, when the town was founded. At that time, there were no structures aside from the depot. He and his wife lived in a boxcar where they boarded trainmen, section men, and occasionally cowboys. In January 1902, the section house was constructed. Soon two small stores were built.

The community's first school was constructed in 1906. By 1910, there were a total of four active churches. In 1919, Nara Visa had eight saloons, at least three dance halls, drugs stores, general merchandise stores, a barber shop, butcher shops, millinery shops, auto suppliers, hotels, garages, and a bank.

In 1921, the Nara Visa School was constructed. It closed and currently is a community center. 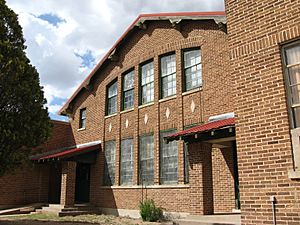 The Union Pacific Railroad passes through Nara Visa, but there are no sidings.

All content from Kiddle encyclopedia articles (including the article images and facts) can be freely used under Attribution-ShareAlike license, unless stated otherwise. Cite this article:
Nara Visa, New Mexico Facts for Kids. Kiddle Encyclopedia.