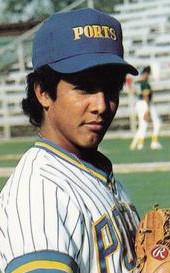 Narciso Elvira (born Narciso Chicho Delgado) Elvira; 29 October 1967 – 28 January 2020) was a Mexican Major League Baseball pitcher. Elvira was purchased by the Milwaukee Brewers from the Mexican League in 1986. He played with the team at the Major League level in 1990. He was born in Tlalixcoyan, Veracruz, México.

Elvira was killed after being shot in Veracruz, Mexico on 28 January 2020 at the age of 52.

All content from Kiddle encyclopedia articles (including the article images and facts) can be freely used under Attribution-ShareAlike license, unless stated otherwise. Cite this article:
Narciso Elvira Facts for Kids. Kiddle Encyclopedia.