Atractocarpus chartaceus, the narrow-leaved gardenia or thin-leaved gardenia, is a species of flowering plant in the family Rubiaceae from eastern Australia. The habitat is the understorey of subtropical and tropical rainforest on fertile soils. The natural range of distribution is from the Richmond River, New South Wales to tropical Queensland. This plant features beautifully scented flowers.

Atractocarpus chartaceus is a shrub or a small tree, up to 6 metres (20 ft) in height, with a stem diameter of 8 cm (3 in). The trunk is crooked and asymmetrical at the base. The bark is brownish grey, and relatively smooth with some wrinkles or horizontal cracks. The tips of the branchlets have fawn hairs. The leaves are opposite on the stem, or whorled. The juvenile leaves are very thin and linear in shape. The adult leaves broad and reverse lanceolate, being narrower at the stem end, and measure 5 to 15 cm (2–6 in) long, 0.5 to 3 cm (0.2-1.2 in) wide. Leaves often marked by the trail of a leaf miner. The mid rib is not raised on the upper surface, although the lateral veins are markedly raised on the upper surface. The midrib is raised under the leaf.

The creamy white flowers form from August to November; they are usually single at the end of branchlets, occasionally in pairs. Flowers fragrantly scented similar to the gardenia. Flower stalks 2 to 5 mm long. The edible fruits mature from April to August, being an orange or red berry, 1.5 to 2 cm long. Many triangular seeds are set in a sweet pulp. Seeds 4 to 5 mm long. Regeneration from fresh seed is fairly slow but reliable. 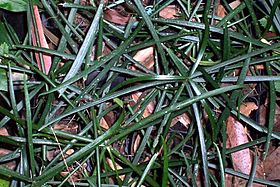 The small size, scented flowers and attractive fruit makes it suitable as garden plant. It prefers some shade and good drainage in cultivation.

German naturalist and Government Botanist for Victoria Ferdinand von Mueller originally described Atractocarpus chartaceus in 1860 as Gardenia chartacea, before giving it the name Randia chartacea in 1875 by which it was known for many years. The specific epithet chartacea refers to its thin and papery leaves. Then in 1999, the genus was revised by botanists Christopher Puttock and Christopher Quinn and the Narrow-leaved Gardenia gained its current binomial name.

All content from Kiddle encyclopedia articles (including the article images and facts) can be freely used under Attribution-ShareAlike license, unless stated otherwise. Cite this article:
Narrow-leaved gardenia Facts for Kids. Kiddle Encyclopedia.