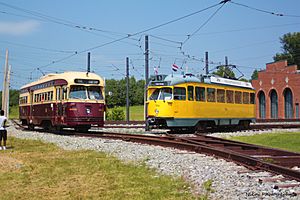 The National Capital Trolley Museum (NCTM) is a 501(c)(3) nonprofit organization that operates historic street cars, trolleys and trams for the public on a regular schedule. It is located at 1313 Bonifant Road, Colesville, Maryland USA. The museum's primary mission is to preserve and interpret the history of the electric street and interurban railways of the National Capital region.

The Museum is open every Saturday and Sunday from Noon until 5:00 p.m. except for Christmas and Christmas Eve; and New Years and New Year's Eve. It is also open to the public on Thursdays and Fridays from 10:00 a.m. to 2:00 p.m. during the following calendar dates: 15 March until 15 May, 15 June until 15 August, and 1 October until 15 November.

NCTM was incorporated on January 4, 1961, as the National Capital Historical Museum of Transportation, Inc. Progress was slow at first, but the Museum eventually combined efforts and streetcar collections with a group from Baltimore.

The organization found its first home in Lake Roland Park in Baltimore, Maryland.

After efforts were thwarted by adjacent property owners, the group divided the collections in 1966. National Capital Trolley Museum moved to its present site in Colesville, Maryland, while the Baltimore Streetcar Museum was formed to focus on Baltimore transit.

The site was provided by Maryland-National Capital Park and Planning Commission, and DC Transit leased trolleys for a nominal cost. The organization raised $20,000 to build a car barn. Groundbreaking of the Colesville site began on November 20, 1965.

NCTM's original intention was to operate streetcars owned by DC Transit president O. Roy Chalk, but it was not until 1970 that Chalk donated several historic Washington streetcars. In the interim, the museum acquired a small fleet of European trams and a car from Johnstown, Pennsylvania.

NCTM ran its first streetcar in October 1969, and since then the museum has operated consistently over its one-mile line.

In the winter of 2008–2009, the Museum moved into three new buildings: a Visitors Center, a display building for the streetcars (Street Car Hall), and a streetcar storage and maintenance building. Construction of the Intercounty Connector, (ICC) which crosses the Museum's former location, required the Museum to shift locations in the Park. The Museum reopened on Saturday, January 16, 2010.

The Museum offers a variety of education programs and activities throughout the year. On Thursdays and Fridays each spring and fall, the Museum hosts school field trips by advance reservation. Special summer programs are offered on Thursday and Friday from June 15 to August 15 with age-appropriate activities.

At one point or another, NCTM has owned an example of nearly every type of Washington streetcar to be preserved. These include:

The asterisk (*) indicates cars lost in the 2003 carbarn fire.

NCTM holds the largest collection of surviving Washington, D.C. street cars in the world, in addition to an archives library of Washington street car and Maryland interurban railroad records, journals, and miscellaneous artifacts.

During public hours, street cars leave the Museum from the Dispatcher’s Desk in the center of the Visitor’s Center. The Demonstration Railway is the largest and most popular exhibit of the Museum. The one mile (1.6 km) line goes past Street Car Hall and the Maintenance Barn and down into the woods past Dodge siding, along Northwest Branch, and on to Fish Hook loop to turn around for the return trip.

Street Cars Go to the Movies

Harold Lloyd’s silent films are excerpted and displayed continuously in a small theater. Exhibits on the walls leading into the theater link the importance of movies and street cars to community life in the early part of the 20th century.

This exhibit highlights street car transportation in the local communities and includes a working model of the street car line through Chevy Chase, one of the first street car suburbs in the country. This exhibit includes images of the power house at the end of the line, a worker emerging from a plow pit where each street car traveling between downtown and the suburbs is converted from collecting underground power with a plow to an overhead trolley pole. Visitors can use the controller handle to start the street car and can operate a dynamo to generate electricity for the lights in the buildings along the track.

An actual piece of track and the steel framework for the underground electrical conduit is on display in Conduit Hall along with a model of a conduit switch. Conduit Hall also includes overhead "trolleys" (the electricity collecting device that makes contact with the overhead wire) and a hands-on controller from the early 20th century.

Adjacent to Conduit Hall and the Visitor Center is Street Car Hall. At any one time seven or more street cars are on display in this spacious building. Near the cars are illuminated kiosks with information about the street cars in the collection and their history. The display includes the oldest street car in the collection, DC Transit 0522 built in 1898. At the end of each street car trip, a docent will take passengers into Street Car Hall and discuss the history of street car development and answer questions.

All content from Kiddle encyclopedia articles (including the article images and facts) can be freely used under Attribution-ShareAlike license, unless stated otherwise. Cite this article:
National Capital Trolley Museum Facts for Kids. Kiddle Encyclopedia.