The National Centre for Photography, sited in the regional city of Ballarat in Victoria, Australia exhibits, promotes, archives, and provides education, in photography. 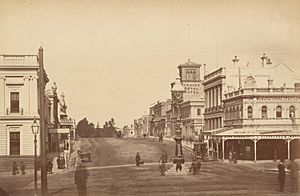 The business name, National Centre for Photography, was registered with ASIC in March 2018. After the purchase in April 2018 of its premises for $1.3 million by the Ballarat International Foto Biennale and already functioning for its 2019 season 24 August – 20 October, the National Centre for Photography hosted the group exhibition Capital in the chambers of 1860s Union Bank on Lydiard Street. Positive critical reception on this occasion affirmed it as an appropriate venue for showing the use of photography to examine systems of value and exchange in contemporary Indigenous and settler cultures.

Space on the second floor, occupied for the last 50 years by an accounting firm, was the site of Incremental Loss, Robbie Rowlands' ambitious deconstruction of the interior, commissioned by BFB to celebrate the conversion of the building to its new purpose. The top floor was devoted to Stock Market, Mathieu Asselin's documentation of the growth of the global biotechnology corporation Monsanto, manufacturer of insecticides and genetically engineered seeds.

In November 2020, the Andrews Labor Government announced the establishment of a National Centre for Photography in Ballarat following on the success of the Biennale which had been held in the city since 2009 and which enabled the purchase by the Biennale organisation of the heritage-listed Union Bank building, consolidating an arts precinct around the Ballarat Art Gallery; the visual art studios of SMB campus, Federation University Australia; and the Post Office Gallery.

$6.7 million from the Victorian Budget 2020/21, historic in being the biggest single cash grant to go to an Australian photographic organisation, was allocated to create the new centre to attract visitors, support jobs and strengthen the city’s cultural standing, and is predicted to generate $75.7 million in economic benefit across the next 15 years from visitors and associated tourism.

Minister for Tourism, Sport and Major Events Martin Pakula confirmed the contribution of the Biennale to the feasibility of the Centre; “The Ballarat International Foto Biennale is one of Victoria’s iconic regional events and the National Centre for Photography will allow it to contribute to Ballarat’s economy and jobs strength year-round.” Artistic director of the Biennale, and now manager of the new Centre, Fiona Sweet, who with other organisers lobbied for two years for support, remarked that: “This money is a real investment in culture – it directly supports the arts in regional Victoria and will no doubt generate significant visitation to Ballarat.”

The founding of the National Centre was coincidental with the closure, after 47 years, of the Australian Centre for Photography in Sydney, which was suffering a loss of government funding, falling visitation due to COVID, and an unsustainable defecit from its educational workshops. 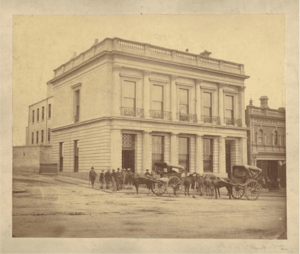 The 436-square-metre three-story Greek Revival building is considered the finest work of prolific bank and church architect, Leonard Terry (1825-1884), who in 1853 migrated to Australia from Yorkshire. Heritage advisors Lovell Chen oversaw the removal of the 1970s fit-out which was carried out by BIFB-commissioned artist-in-residence Robbie Rowlands starting in February 2019; a process in which he peeled back walls, chain-sawed ceilings and floors and sliced up fixed furniture, documenting the progress as the artwork Incremental Loss and displayed as large-format photographs in the 2019 Biennale.

The Centre houses multifunctional spaces, including four galleries, for major temporary exhibitions by local, domestic and international artists; educational workshop spaces and a black-and-white darkroom; an artist-in-residence program and opportunities for community artists to exhibit; a stockroom housing BIFB’s permanent collections, including the Martin Kantor Portrait Prize and a photobook library; and a rooftop bar.

The bulk of the budget allocated by the Victorian government enabled renovation of the gold-rush era building which was purchased by the BIFB in 2018. Plans also incorporate a digital 3D "immersive" gallery that will be open daily.

All content from Kiddle encyclopedia articles (including the article images and facts) can be freely used under Attribution-ShareAlike license, unless stated otherwise. Cite this article:
National Centre for Photography Facts for Kids. Kiddle Encyclopedia.