At nearly all of the 417 American National Park units of the United States (and many of the National Park Service's affiliated areas), one or more National Park Passport Stamps (cancellation stamps) can be acquired at no cost at park visitor centers and ranger stations. The stamps are similar in nature to passport stamps stamped in a traveler's national passport. The stamps serve as a record of each park visit. The Passport to Your National Parks program is run by Eastern National, a non-profit organization. The program began in the middle of 1986. Collectors of the stamps have formed a non-profit social club, the National Park Travelers Club, a group which holds annual conventions. The 2015 convention was held at Chamizal National Memorial.

Passport books, sold at Eastern National park stores and eParks.com, provide a place for park visitors to collect National Park cancellation stamps. Over 1,300,000 Passport books have been sold. The 3.25" x 5.5" passport book provides five pages for each of the nine regions where the passport user can place ink stamp cancellations and can affix one featured stamp per page. A featured stamp collector's passport would therefore be filled after five years of use as long as the featured stamps were added to the book each year. In 2006, for the program's 20th anniversary, the "Passport Explorer" was released, featuring a binder and larger pages. Due to its binder format, the Passport Explorer allows the user to easily add extra pages for additional cancellation stamps and featured stamps. 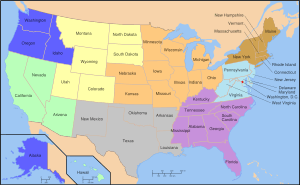 The nine passport regions (The DC area is its own region)

The National Park Service is administratively divided into regions. Each region provides oversight and guidance to the park units within its geographic area. While the NPS currently divides the various parks, monuments, and other units among seven regions, the passport booklet observes the nine regions in effect when the program was established.

In addition to the cancellation stamps, each year the National Parks Passport Program releases a set of ten full-color collector stamps featuring a photo and description of one park per region. Passport holders can affix these adhesive stamps to their Passport book in a designated space below which they can stamp the corresponding cancellation. The Park units featured on the stamp sets change each year.

The stamp sets, dating back to their inception in 1986, are still readily available at most park unit gift shops for under $10, or on the internet through Eastern National.

Originally, the featured stamps were only available in the region they represented, save for Colonial National Historical Park, where Eastern-National was headquartered. In 1986 the stamps were printed on thin cardboard, which distorted the passbook due to the combined thickness of the cardboard. Each stamp would be mounted onto its respective page with a lightweight, black, adhesive-backed plastic sleeve. Since 1987, the annual stamp series have been minted on a single sheet of adhesive-backed glossy paper, of a quality similar to that of conventional postage stamps.

All content from Kiddle encyclopedia articles (including the article images and facts) can be freely used under Attribution-ShareAlike license, unless stated otherwise. Cite this article:
National Park Passport Stamps Facts for Kids. Kiddle Encyclopedia.