Nature versus nurture facts for kids 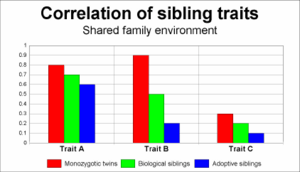 The nature versus nurture debate is about the causes of differences between people.

Like all living things, people have inherited innate qualities. There are also events or experiences which happen during life. 'Nature' describes the effect of a person's genes, whereas 'nurture' describes whatever happens during life.

In the language of population genetics, the heritability of a feature is the extent to which it is inherited genetically. That includes traits of behaviour and character. Though the public debate is all about humans, the principles apply to any living thing, plants as well as animals.

The phrase 'nature versus nurture' was suggested by the Victorian polymath Francis Galton. He was influenced by Darwin's On the Origin of Species. He investigated the influence of heredity and environment on social advancement.

It was always known that people inherited some features, but were modified during life. The terms had been contrasted, for example, by Shakespeare (in The Tempest: 4.1.204–206). Even before Shakespeare, the English schoolmaster Richard Mulcaster wrote in 1582:

"Whereto nature makes him toward, but that nurture sets him forward".

Galton did not oppose nature to nurture as two alternatives. The phrase 'nature vs nurture' has been rightly criticized for its over-simplification. Almost all writers have realised that both play a part in our make-up. One who, at first sight, seemed to think humans got their 'mind' from nurture (the tabula rasa or blank slate theory) was philosopher John Locke. He, however, was only concerned with how we acquire knowledge from sense data.

Both nature and nurture play interacting roles in development, and many modern psychologists and anthropologists consider the contrast naive. They see it as an outdated state of knowledge.

Identical twins are natural clones. Because they carry the same genes, they may be used to investigate how much heredity contributes to individual people. Studies with twins have been quite interesting. If we make a list of characteristic traits, we find that they vary greatly in how much they owe to heredity. For example:

The way the studies are done is like this. Take a group of identical twins and a group of fraternal twins, and a group of siblings from the population. Measure them for various traits. Do a statistical analysis (such as analysis of variance). This tells you to what extent the trait is inherited. Traits which are partly inherited will be significantly more similar in identical twins.

The person who first did twin studies was Francis Galton, Darwin's half-cousin, who was a founder of statistics. His method was to trace twins through their life-history, making many kinds of measurement. Unfortunately, though he knew about mono and dizygotic twins, he did not appreciate the real genetic difference. Twin studies of the modern kind did not appear until the 1920s.

Estimates of the heritability of IQ

Studies have found the heritability of IQ to be between 0.7 and 0.8 in adults and 0.45 in childhood in the United States. It may seem reasonable to expect that genetic influences on traits like IQ should become less important as one gains experiences with age. However, that the opposite occurs is well documented. Heritability measures in infancy are as low as 0.2, around 0.4 in middle childhood, and as high as 0.8 in adulthood. Everyday experience would suggest that as people grow older, they get to know themselves better. They choose, if they can, jobs and activities which make the most of their abilities. The effect of this would be to show a closer fit between their genetics and their environment.

A 1994 review in Behavior Genetics based on identical/fraternal twin studies found that heritability is as high as 0.80 in general cognitive ability but it also varies based on the trait, with 0.60 for verbal tests, 0.50 for spatial and speed-of-processing tests, and only 0.40 for memory tests.

In 2006, The New York Times Magazine said about three quarters for heritability (0.75) was found in most studies. A 2004 analysis of reports in Current Directions in Psychological Science gave an overall estimate of around 0.85 for 18-year-olds and older.

All content from Kiddle encyclopedia articles (including the article images and facts) can be freely used under Attribution-ShareAlike license, unless stated otherwise. Cite this article:
Nature versus nurture Facts for Kids. Kiddle Encyclopedia.