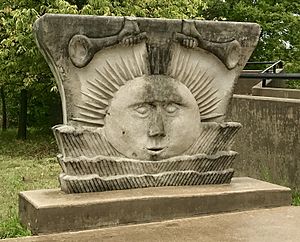 Carving at the LDS Temple Quarry

There are many non-contributing, modern structures in the district.

The district was declared a National Historic Landmark in 1961. It is significant as the headquarters of The Church of Jesus Christ of Latter-day Saints (LDS Church) from 1839 and 1846, and as an important early example of community planning by the LDS church. The city's basic plan is still discernible despite the many modern intrusions, and there are a wealth of historical archaeological sites related to the early LDS settlement period, including the site of the main temple, which occupied a prominent location in the city; it was burned in 1848 and its remains were levelled by a tornado in 1865. Due to the large influx of Mormons, Nauvoo became Illinois's largest city for a brief period in the 1840s. Despite this, it lacked a distinct commercial center, consisting mainly of residences laid out on broad streets on a rectangular grid.

The Mormons were forced out of Nauvoo in 1848, and the community was taken over by the Icarians, a utopian religious movement. In the 1960s, Mormon preservationists began to restore it and develop it as a tourism site related to the history of Mormonism.

All content from Kiddle encyclopedia articles (including the article images and facts) can be freely used under Attribution-ShareAlike license, unless stated otherwise. Cite this article:
Nauvoo Historic District Facts for Kids. Kiddle Encyclopedia.