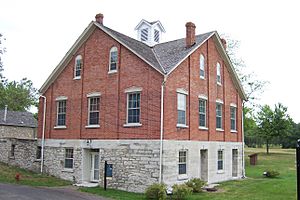 The Nauvoo House as it appears today.

The Nauvoo House in Nauvoo, Illinois, is a boarding house that Joseph Smith, the founder of the Latter Day Saint movement, began constructing in the 1840s. The boarding house was never completed, but the structure was later converted into a residential home and renamed the Riverside Mansion. The Nauvoo House, as it is referred to today, is part of the Nauvoo Historic District, a National Historic Landmark.

In January 1841, Smith received a revelation with instructions to construct a house in Nauvoo which would be "a resting-place for the weary traveler". The revelation also instructed that the building should be called the Nauvoo House, and set out detailed instructions about how the building of the house would be financed. George Miller, Lyman Wight, John Snider, and Peter Haws were appointed as the overseers of the project, and they created the Nauvoo House Association on 23 February 1841. 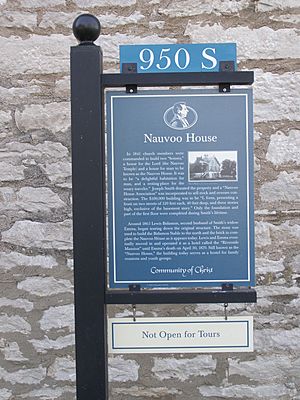 After Smith's death, his widow Emma Smith retained title to the Nauvoo House. When the majority of Latter Day Saints left Nauvoo in the late 1840s, the house was still only partially completed. In the 1870s, Emma and her husband Lewis C. Bidamon converted the unfinished hotel into a smaller structure called the Riverside Mansion (also called Bidamon House). At this time, Lewis Bidamon removed the Book of Mormon manuscript from the cornerstone, and it was subsequently purchased by The Church of Jesus Christ of Latter-day Saints. Emma Bidamon and Lewis Bidamon both lived in Riverside Mansion from 1871 until their deaths.

In 1909, the Reorganized Church of Jesus Christ of Latter Day Saints (RLDS Church) purchased the property. The Nauvoo House is still owned by the RLDS Church, which is now called the Community of Christ, and it operates the house as a dormitory available for group rental, as well as a stop on their guided walking tour of the Joseph Smith Historic Site.

All content from Kiddle encyclopedia articles (including the article images and facts) can be freely used under Attribution-ShareAlike license, unless stated otherwise. Cite this article:
Nauvoo House Facts for Kids. Kiddle Encyclopedia.