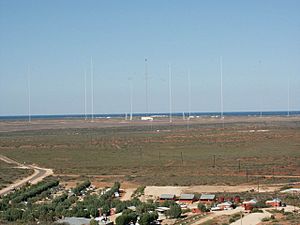 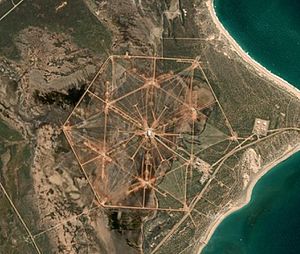 Naval Communication Station Harold E. Holt is located on the northwest coast of Australia, 6 kilometres (4 mi) north of the town of Exmouth, Western Australia. The town of Exmouth was built at the same time as the communications station to provide support to the base and to house dependent families of US Navy personnel.

The station provides very low frequency (VLF) radio transmission to United States Navy and Royal Australian Navy ships and submarines in the western Pacific Ocean and eastern Indian Ocean. The frequency is 19.8 kHz. With a transmission power of 1 megawatt, it is the most powerful transmission station in the Southern Hemisphere. 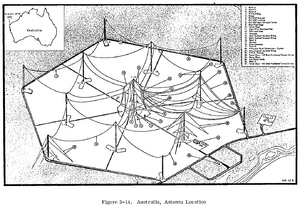 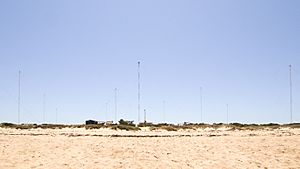 VLF transmitter masts as seen from nearby Bundegi Beach

On 3 March 2009, the Defence Materiel Organisation advertised on the AusTender website a tender to construct two new roads at the station. The tender stated the 357 guy wires which support the 13 towers had exceeded their life expectancy and the roads will support the installation of the VLF guy wires. It states:

Naval Communication Station Harold E Holt (NCSHEH) is sited on the northernmost tip of the peninsula known as North West Cape. The Very Low Frequency (VLF) antennas are large spider webs of wire supported in a top hat arrangement. The centre tower 'Tower Zero', rises to a height of 387.9 metres. The other towers are spread out in two concentric rings around Tower Zero; the towers of the inner ring are 364 metres high while those of the outer ring are 304 metres high. Buried in the ground beneath the antenna array is 386 kilometres of bare copper ground mat. 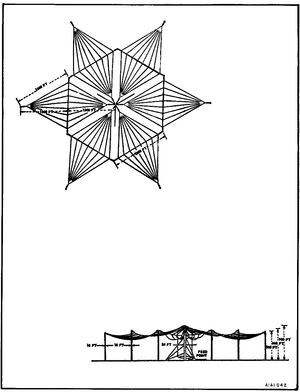 Diagram of a Trideco type antenna like that installed at Harold E. Holt.

Sir Garfield Barwick, Australian Minister for External Affairs, negotiated the lease on the US Base at North West Cape in 1963 with US Ambassador William Battle. The station was commissioned as U.S. Naval Communication Station North West Cape on 16 September 1967 at a ceremony with the US Ambassador to Australia Ed Clark and the Prime Minister of Australia Harold Holt, at which peppercorn rent for the base for the first year was paid.

On 20 September 1968, the station was officially renamed to US Naval Communication Station Harold E. Holt in memory of the late Harold Holt, Prime Minister of Australia, who disappeared whilst swimming and was declared dead, presumed drowned, three months after the station was commissioned.

With the election of the Labor Government to power in 1972, Defence Minister Lance Barnard started negotiations on the condition of operation of the US military bases in Australia. On 9 January 1974 a joint statement by Lance Barnard and James Schlesinger, the US Secretary of Defense, assigned the Deputy Commander of the base to a Royal Australian Navy officer and gave Australian personnel roles in base technical and maintenance functions. The cipher room was closed to Australian scrutiny. The joint statement stressed the importance of consultations in crises. There was no undertaking given by the US to relay fire orders to their submarines bearing nuclear missiles.

In May 1974 several hundred people traveled to North West Cape from around Australia to protest and occupy the base and "symbolically reclaiming it for the Australian people". During the occupation the Eureka Flag was flown over the base with fifty-five people arrested during the protest. Songs composed in the campaign against North West Cape and other US bases in Australia include We don't want no Yankee Bases and Omega Doodle which have become part of the Australian folkloric tradition. From 1967 until October 1992 a Naval Security Group Detachment was stationed at the facility. 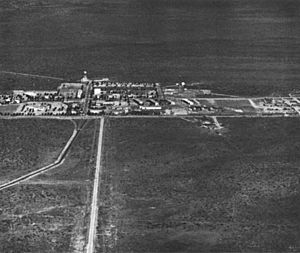 In Western Australian domestic politics, the presence of foreign military installations in the state has occasionally been questioned over the decades. The "U.S." was dropped from the station's official title with the advent of joint United States and Royal Australian Navy operation in 1974. In 1991, an agreement was reached between the governments of Australia and the United States that would make the facility an Australian Naval Communication Station by 1999, a transition that began with a Royal Australian Navy officer taking command of the facility in 1992. The majority of US Naval presence ended in 1993 with the withdrawal of all US Naval personnel.

In July 2002, the Royal Australian Navy handed over operation of the station to the Defence Materiel Organisation. The base is currently operated under contract by Raytheon Australia. On 15 July 2008, Australia and the US signed a bilateral treaty governing the future joint use of the facility for the next 25 years.

Harold E. Holt was identified as a potential Air Force Space Surveillance System (or Space Fence) site in 2011. On 6 December 2013 it was announced that the Space Surveillance Telescope (SST), part of the United States Space Surveillance Network, will be relocated to the Harold E. Holt Naval Communication Station from its initial deployment at the White Sands Missile Range in New Mexico. The SST was expected to be ready for operations in 2016. It has since been announced that DARPA handed over control of the SST optical telescope to the US Air Force in October 2016 and it will be transferred to Harold E. Holt Naval Communication Station and become operational in 2020.

A C-Band Space Surveillance Radar is also being installed and once completed will be operated remotely by Royal Australian Air Force personnel from No. 1 Remote Sensor Unit at RAAF Base Edinburgh. It will provide a Space Situational Awareness capability, allowing the tracking of space assets and debris.

All content from Kiddle encyclopedia articles (including the article images and facts) can be freely used under Attribution-ShareAlike license, unless stated otherwise. Cite this article:
Naval Communication Station Harold E. Holt Facts for Kids. Kiddle Encyclopedia.