Nelson Central School is a state primary contributing school located in the inner city of Nelson at the top of the South Island of New Zealand teaching children of both genders aged 5 to 11 years. 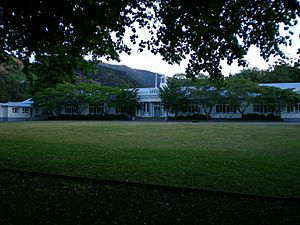 Nelson Central School is now the oldest school in New Zealand still functioning on its original unitary site. Consequently, its main building and Renwick House (named after Dr Thomas Renwick) are of architectural interest. The site of the present school was purchased by the Nelson Education Board in 1893 for £1600. The official opening ceremony of the main school building was held on Monday 23 June 1930. The school building is registered by Heritage New Zealand as a Category II historic structure. The building was added to the register on 25 November 1982, with register number 1596.

(The first school in the new Pākehā settlement of Nelson had opened in March 1842, "in a house built of toi toi", just a few months after the New Zealand Company's first settlers landed.)

The number of Māori children enrolled at the school is proportionately greater than would be expected given the total Māori population in the City of Nelson. This may be due to the presence of four Māori language immersion classes with a full-time Kaiarahi reo within Nelson Central.

All students take part in the school's Mana Maori programme as required under the Treaty of Waitangi and all students have the opportunity to acquire some knowledge of Maori language and culture.

All content from Kiddle encyclopedia articles (including the article images and facts) can be freely used under Attribution-ShareAlike license, unless stated otherwise. Cite this article:
Nelson Central School Facts for Kids. Kiddle Encyclopedia.