The Nelsonville Music Festival is an annual four-day music festival located at the Historic Village of Robbins Crossing at Hocking College in Nelsonville, Ohio. The event in Southeastern Ohio usually takes place in late May or early June and features a variety of musical genres and includes local, regional, national and international artists. The weekend celebration includes local food and artisans as well as a campground for both primitive and RV camping. The festival also provides activities for children and strives to be environmentally friendly.

The first Nelsonville Music Festival was held on July 23, 2005 on the square in the downtown Nelsonville Historic Arts District in Nelsonville, Ohio. The first event included six bands and a crowd of around 750 people, as well as artisans from the region. The festival is produced by Stuart's Opera House, a historic non-profit theatre. All proceeds of the event go towards keeping Stuart's Opera House in operation. The festival was started as an opportunity to bring more people to Nelsonville and served as revitalization of the arts district. The second and third year, the festival was held in a field behind Rocky Boots, a popular shoe outlet headquartered in the town. After three years as a one-day event, the festival was expanded to become a three-day event and was moved to the Historic Village of Robbins Crossing at Hocking College. The festival has since added a fourth day and expanded to feature more than 60 bands and a crowd of upwards of 7,000 in 2014.

Performance areas include the Main Stage, the Porch Stage, the Boxcar Stage, the Camp Stage and the No-Fi Cabin, which is located inside of a small, historic, one-room schoolhouse with no electricity. The performers at the No-Fi Cabin play acoustic sets for a small audience of less than 100 people.

Vendors at the event include local and regional artisans, food, and workshops. Locally grown organic food is available as well as handmade drums, jewelry, art, and soap. Students of Hocking College have the opportunity to sell their own artwork and crafts.

Partnered with Rural Action, the festival strives to be zero waste by implementing recycling, composting, and education. Reusable cups are available for one dollar, which can be used for beer or free water. Attendees can refill their water bottle or cup at a provided station equipped with a water filtration device.

The festival offers free passes to children 12 and under. Teens 13-17 can purchase a discounted ticket. There are numerous activities available for children, including an area for children to listen to and create their own music and musical instruments, and puppets for a puppet parade. There is a kids stage which features workshops and performances all three days of the festival and a project for a community mural.

The 11th annual Nelsonville Music Festival took place from May 28–31, 2015. Headliners included a return performance by The Flaming Lips, as well as St. Vincent, Merle Haggard, Trampled By Turtles, Built To Spill and Brandi Carlile.

The 10th annual Nelsonville Music Festival took place from May 29-June 1, 2014. Headliners included a return performance by The Avett Brothers, along with Dinosaur Jr., Shovels & Rope, The Head and the Heart, Kurt Vile & The Violators and Jason Isbell. 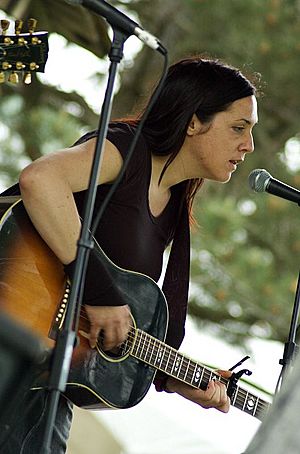 Sarah White appears at Nelsonville Music Festival in Nelsonville, Ohio on May 17, 2008.

The inaugural Nelsonville Music Festival was held on July 23, 2005. The event featured performances by Dirty Dozen Brass Band, The Derailers, The Royales, The Carpenter Ants and Slaughter Drive.

All content from Kiddle encyclopedia articles (including the article images and facts) can be freely used under Attribution-ShareAlike license, unless stated otherwise. Cite this article:
Nelsonville Music Festival Facts for Kids. Kiddle Encyclopedia.