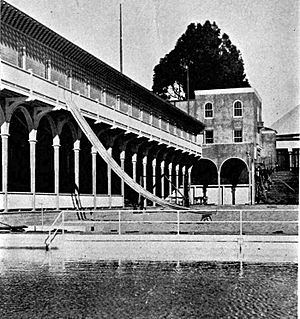 Neptune Beach was an amusement park on the shore of San Francisco Bay in the city of Alameda, California. The park was served by the Southern Pacific Transportation Company and ferries from San Francisco. It operated from 1917 until it closed in 1939.

Opened in 1917, Neptune Beach occupied a beach front zone now known as Crab Cove and was originally owned by the Strehlow family. Admission to the park was a dime. The park was described as a place for private picnics, with a clubhouse for dancing, and barbecue pits. The Cottage Baths were vacation cottages, available for rent. There were dances on Friday and Saturday night.

The Strehlows owned and operated the beach and filled in a section of the Bay to add an additional Olympic-size swimming pool and a roller coaster with views of the Bay. Its two outdoor pools hosted swimming races and exhibitions by swimmers such as Olympian Johnny Weissmuller, who later starred as MGM's Tarzan, and Jack LaLanne who started a chain of health clubs. The park also featured a hand-carved carousel from the Dentzel Company and a Ferris wheel.

The park closed down in 1939 because of the Great Depression, the completion of the San Francisco–Oakland Bay Bridge, people circumventing paying the admission price and in general, the rise of car culture. Once the Bay Bridge was complete, the rail lines that ran past the entrance to Neptune Beach, on the way to the Alameda Mole and the Ferry, lost riders in droves. People began using their cars to escape the city and the immediate suburbs like Alameda and traveling further afield in California. Alameda lost its resort status as more distant locations became more attractive to cash-rich San Francisco tourists. Young people in town became aware of ways to avoid paying the dime for admission to the park. Strong swimmers or even waders could sneak in on the bay side by swimming around the fence. While some of the resort homes from Neptune Beach still exist and can be seen near Crab Cove, the vast majority of the structures—the carousel, the Ferris wheel, roller coaster and other rides—were auctioned off in 1940 for a fraction of their original cost.

All content from Kiddle encyclopedia articles (including the article images and facts) can be freely used under Attribution-ShareAlike license, unless stated otherwise. Cite this article:
Neptune Beach (California) Facts for Kids. Kiddle Encyclopedia.