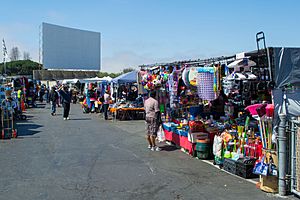 The South Bay Drive-In Theater and Swap Meet in Nestor

Nestor is a residential neighborhood in the southern section of San Diego, and part of the Otay Mesa-Nestor community planning area. It neighbors Palm City and Otay Mesa West to the east, Egger Highlands to the north, San Ysidro to the southeast and the Tijuana River Valley to the south. Major thoroughfares include Coronado Avenue, Saturn Boulevard, Hollister Street, and Tocayo Avenue.

Nestor is named for Nestor A. Young, California state assemblyman from 1884-1886 and San Diego harbormaster from 1889. The community began as farming community of Japanese Americans. Nestor, along with other portions of South San Diego, was annexed from San Diego County in 1957.

All content from Kiddle encyclopedia articles (including the article images and facts) can be freely used under Attribution-ShareAlike license, unless stated otherwise. Cite this article:
Nestor, San Diego Facts for Kids. Kiddle Encyclopedia.