Kids Encyclopedia Facts
This page is about the borough in Perry County, Pennsylvania. For the Neighborhood of Pittsburgh, see Bloomfield (Pittsburgh).

New Bloomfield is a borough in Perry County, Pennsylvania, and is the county seat. The population was 1,077 at the 2000 census. It is part of the Harrisburg–Carlisle metropolitan statistical area.

New Bloomfield was laid out in 1823, and named for the blooming clovers near the original town site. A post office called New Bloomfield has been in operation since 1825.

The Perry County Courthouse was added to the National Register of Historic Places in 1975.

The official name of the borough is Bloomfield. However the United States Postal Service, presumably to avoid confusion with the neighborhood of Pittsburgh which is also named Bloomfield, refers to the area as "New Bloomfield." 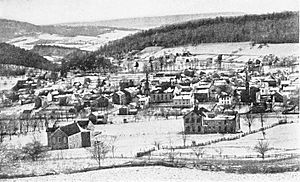 A view of New Bloomfield from the north, 1913

There were 396 households out of which 29.8% had children under the age of 18 living with them, 51.0% were married couples living together, 9.6% had a female householder with no husband present, and 35.4% were non-families. 31.6% of all households were made up of individuals and 15.2% had someone living alone who was 65 years of age or older. The average household size was 2.25 and the average family size was 2.84. In addition, there is a military boarding school, Carson Long Military Academy, with about 90 cadets.

All content from Kiddle encyclopedia articles (including the article images and facts) can be freely used under Attribution-ShareAlike license, unless stated otherwise. Cite this article:
New Bloomfield, Pennsylvania Facts for Kids. Kiddle Encyclopedia.