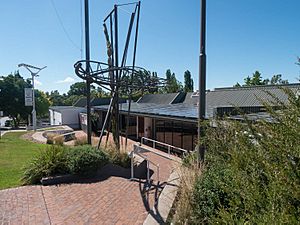 The New England Regional Art Museum, known as NERAM, is a museum of Australian art located in Armidale in the New England region of New South Wales. NERAM's art collections are the second largest and most valuable regional public collection in NSW after the Newcastle Art Gallery. NERAM's collections are valued in excess of A$25 million. The NERAM complex includes six gallery spaces, a Museum of Printing, an artist's studio, conference facilities, shop and café.

NERAM is the custodian of several important collections of Australian art:

NERAM opened in 1983. It was purpose-built to house and exhibit the collections of its two main benefactors, Howard Hinton and Chandler Coventry, as well as the existing Armidale City Art Collection.

Sydney-based collector and benefactor Howard Hinton began donating pictures to the Armidale Teacher’s College in 1929. He aimed to "illustrate comprehensively the development of Australia art" from 1880. His gifts to the College finally totalled over 1,000 works following his death in 1948. By the 1970s it was evident that these valuable and significant works required secure housing, curatorship, preservation and environmental management not available within the open doors and corridors of a teacher’s college. Barry Pearce, former head curator of Australian Art at the Art Gallery of New South Wales described the Hinton donation as including "many magnificent Australian landscapes by a range of major and minor artists ... crowned by such masterpieces as Arthur Streeton's Morning Sketch (aka McMahon's Point Ferry) 1890 and Near Streeton's camp at Sirius Cove, 1892 and, the jewel in the crown, Mosman's Bay, 1894 by Tom Roberts."

In 2016 a significant donation of 11 works by seminal artists of the Hinton period was made to NERAM by arts benefactor John Gale OBE to complement the Hinton collection.

In February 2018 a permanent exhibition, Hinton: Treasures of Australian art, featuring a dense salon-hang of over a hundred and thirty of the most iconic works from the Hinton Collection was opened in the museum's refurbished East Gallery by former Director of the Art Gallery of New South Wales Edmund Capon. Commentators have declared that this opening "establishes NERAM in the top rank of galleries outside the [Australian] capital cities."

Chandler Coventry became a driving force in the campaign to establish NERAM. Coventry grew up in the Armidale area — his "earliest encounters with ‘high art’ were through the Howard Hinton Collection, which he saw as a schoolchild displayed in the rooms and corridors of the Armidale Teachers’ College." An art collector like Hinton, Coventry also established his own commercial gallery in Paddington, Sydney. He offered his collection of 300 artworks, described as "one of the most important collections of contemporary Australian art" on the understanding that an art museum would be built to house both his and Hinton's collections.

The Armidale community began a long-term fundraising effort to build a dedicated museum, and with matching grants from the NSW State government NERAM was formally opened by the Premier of NSW, the Honourable Neville Wran QC, on 26 March 1983.

NERAM was built on crown land near the Armidale Teachers College site, the original home of the Hinton Trust. NSW Government Architect's Special Projects Division, under its Director Andrew Andersons and Project Architect David Turner, prepared detailed sketch plans, and Armidale firm Magoffin and Deakin prepared the working drawings and specifications and supervised construction. In 1997 a Stage II extension designed by architect Colin Still was added to increase display areas, heighten the building's indoor/outdoor relationships, and include a café and artist’s studio.

The NERAM Research Library incorporates Howard Hinton's valuable library collections of books, memorabilia and historical documents, within a general collection on Australian art and a collection of Australian exhibition catalogues.

At the time of construction in 1983, the New England Regional Art Museum Reserve Trust Board was established. This body managed the museum and its operations until 2005 when Armidale Dumaresq Council was appointed Manager of the Reserve Trust by order of the Minister for Lands.

In June 2008, the Reserve Trust was renamed the Armidale Community Cultural Reserve Trust. Armidale Dumaresq Council continued to manage the museum as Reserve Trust Manager until July 1st 2008 when NERAM Limited, a new not-for-profit company Limited by Guarantee took ownership and commenced managing operation of the facilities and artworks in its care.

The museum’s program includes a mixture of touring exhibitions from other institutions and displays and exhibitions curated in-house from the collections. Regional artists are also invited to submit exhibition proposals of their work.

"NERAM does not receive its core funding in the same way as other regional galleries in NSW, which are owned by their local government authority." NERAM is an incorporated body. Its income is derived from a funding agreement with the Armidale Regional Council (formerly Armidale Dumaresq Council), triennial operational grants from the NSW government, philanthropic support from the Margaret Olley Art Trust, membership fees, project grants, donations, art class fees, commercial sponsorship, shop trading, functions hire and fundraising.

The NERAM Foundation was established in 2009 to support the museum, and the Friends of NERAM provides membership and community involvement.

The museum's major annual fundraising project, 'Packsaddle', is an exhibition and commissioned sale of original artworks provided by galleries and artists from across Australia; the funds raised are donated for the acquisition of works for the NERAM Collection.

Within NERAM, the Museum of Printing houses a historically significant collection of printing machinery and equipment, the F T Wimble & Co. Collection. The collection includes historical printing presses, a Linotype machine, guillotines, book binding equipment, wooden and metal type and a history of printing in Australia from 1850 to the early 1900s. There are over 1,000 printing blocks and a comprehensive library of books on printing and technical manuals. Displays of small equipment and printed products change regularly. The museum is the only Australian member of The Association of European Printing Museums (AEPM).

All content from Kiddle encyclopedia articles (including the article images and facts) can be freely used under Attribution-ShareAlike license, unless stated otherwise. Cite this article:
New England Regional Art Museum Facts for Kids. Kiddle Encyclopedia.