The Bead Wreck Site at New Gretna is listed on the National Register of Historic Places as site #88001899.

New Gretna was named after Gretna Green in Scotland. 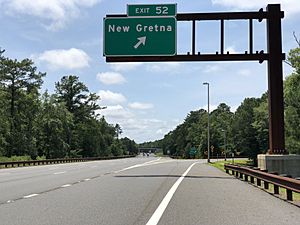 New Jersey Transit provides bus service to and from Atlantic City on the 559 route. New Gretna is served by exits 50 and 52 of the Garden State Parkway.

All content from Kiddle encyclopedia articles (including the article images and facts) can be freely used under Attribution-ShareAlike license, unless stated otherwise. Cite this article:
New Gretna, New Jersey Facts for Kids. Kiddle Encyclopedia.