Located directly on the Mississippi River, New Mexico was the first county seat of Washington County.

In 1827 the United States Congress established a post road from New Mexico to the courthouse in Yazoo County, Mississippi.

In 1830, Princeton was named the county seat after New Mexico "caved into the river". 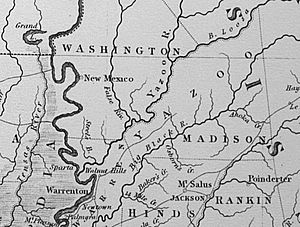 Swiss water-colorist Karl Bodmer traveled down the Mississippi River in the 1820s, and recorded New Mexico's location as "below the mouth of the Arkansas River". Bodmer painted New Mexico on the Mississippi, depicting the settlement's inhabitants and layout.

Historians have stated that New Mexico was located near present-day Mayersville.

All content from Kiddle encyclopedia articles (including the article images and facts) can be freely used under Attribution-ShareAlike license, unless stated otherwise. Cite this article:
New Mexico, Mississippi Facts for Kids. Kiddle Encyclopedia.