Mayersville is a town on the east bank of the Mississippi River, and the county seat for Issaquena County, Mississippi. It is located in the Mississippi Delta, a region known for cotton cultivation in the antebellum era. Once the trading center for the county, the town was superseded when railroads were built into the area. The population of the majority-black town has declined to 795 at the 2000 census and lower since then. 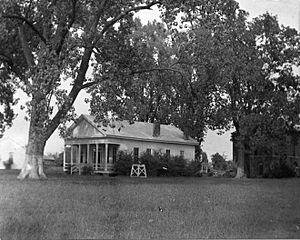 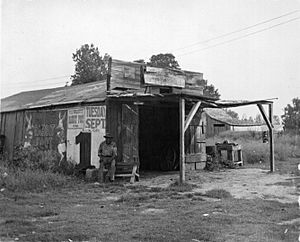 Native Americans had lived in this area since prehistoric times. The Mayersville Archeological Site, added to the National Register of Historic Places in 1980, is on privately owned land. It contains the remains of earthwork mounds constructed primarily in the Mayersville phase (A.D. 1200-1400) of the earlier Mississippian culture. A 1950 survey by Philip Phillips of the Peabody Museum of Archaeology and Ethnology reported eleven ancient mounds. By the time the site was nominated by the state to the National Register of Historic Places, two mounds had been completely destroyed, a third one was nearly gone, three were reduced in size by plowing, and five remained nearly as described. Three mounds had enclosed a large plaza measuring roughly 170 by 240 meters. The fourth side was bounded by three mounds. Among these was Mound I, which was found to have been re-occupied from 1400 to 1600, perhaps by the succeeding Choctaw people. A European-American family cemetery associated with a 19th-century plantation was developed on Mound A.

The first record of non-Native settlement was in 1830, when European-American Ambrose Gipson purchased a large body of land along the river and founded 'Gipson's Landing'. This soon became the port on the Mississippi River for shipping out the cotton of Issaquena and Sharkey counties. It attracted shifting populations of river crews, gamblers, and traders, as well as show boats during low water times. The shipping records for David Mayer, who owned nearby Mout Level Plantation, show that river freight was shipped from the port via steamboat to points in Arkansas, Louisiana, Missouri, and Mississippi.

Mayer purchased Gipson's Landing in 1870, and the town of 'Mayersville' was founded in 1871. The town was established in 1872 by the legislature as the Issaquena County seat.

In January 1885, black saloon keeper Ebenzer Fowler was rumored to have sent an insulting letter to a white woman in the town. An armed white posse confronted Fowler on the main street just before dark on January 30, 1885. They claimed that Fowler grabbed a gun from a posse member and fired a shot at them; they returned fire and shot him dead. Tension between the town's blacks, a majority of the population, and whites flared following the shooting. The county sheriff called in twenty-two members of Vicksburg's militia, 'Volunteer Southrons,' for assistance. The militia left the following day when tensions had eased.

Mayersville’s popularity as a shipping port began to decline in the mid-1800s when it had to compete with the railways being built across the South, though no railway was built to the town. The construction of a levee following the hugely destructive flood of 1927 cut off direct river access for the town, causing further decline. In the 21st century, Bunge North America operates a large grain port in Millers Landing north of town.

In 1958, the current County Courthouse in Mayersville was built.

With federal legislation in the mid-1960s, African Americans regained the ability to register and vote. In 1976, famed civil rights activist Unita Blackwell was elected Mayor of Mayersville and the first female African-American mayor in Mississippi.

Mayersville's small population and quiet character are in sharp contrast to its years as a booming Mississippi River port.

According to the United States Census Bureau, the town has a total area of 1.1 square miles (2.8 km2), all land.

As of the 2013 American Community Survey, there were 652 people residing in the town, a decline since 2000. The remaining population is increasingly African American. 90.2% were African American, 9.7% White and 0.2% from some other race. 0.2% were Hispanic or Latino of any race.

There were 190 households out of which 40.5% had children under the age of 18 living with them, 26.3% were married couples living together, 31.1% had a female householder with no husband present, and 33.2% were non-families. 31.1% of all households were made up of individuals and 13.7% had someone living alone who was 65 years of age or older. The average household size was 2.80 and the average family size was 3.53.

All content from Kiddle encyclopedia articles (including the article images and facts) can be freely used under Attribution-ShareAlike license, unless stated otherwise. Cite this article:
Mayersville, Mississippi Facts for Kids. Kiddle Encyclopedia.