Rolling Fork is a town in Sharkey County, Mississippi. The population was 2,143 at the 2010 census. It is the county seat of Sharkey County. 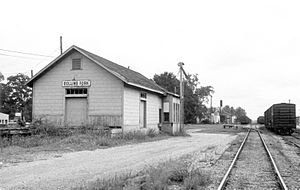 Thomas Y. Chaney located here in 1828, and was the first settler in the county. Deer Creek flows through the settlement, and Chaney called the place "Rolling Fork" because of the swiftness of the water at a fork in the creek there.

When Sharkey County was established in 1876, Rolling Fork was made the county seat.

A newspaper, The Deer Creek Pilot, was established in 1884.

The Louisville, New Orleans and Texas Railway was built through Rolling Fork in 1883. It was later acquired by the Illinois Central Railroad.

In 1908, the Bank of Rolling Fork was established.

According to the United States Census Bureau, the city has a total area of 1.4 square miles (3.6 km2), all land. 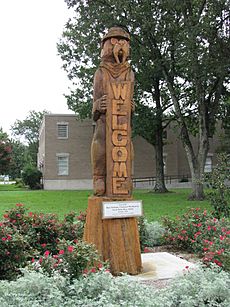 There were 820 households, out of which 35.9% had children under the age of 18 living with them, 37.9% were married couples living together, 32.8% had a female householder with no husband present, and 24.3% were non-families. 22.2% of all households were made up of individuals, and 9.5% had someone living alone who was 65 years of age or older. The average household size was 2.90 and the average family size was 3.40.

The city of Rolling Fork is served by the South Delta School District. The district has three schools with a total enrollment of approximately 1,300 students.

All content from Kiddle encyclopedia articles (including the article images and facts) can be freely used under Attribution-ShareAlike license, unless stated otherwise. Cite this article:
Rolling Fork, Mississippi Facts for Kids. Kiddle Encyclopedia.