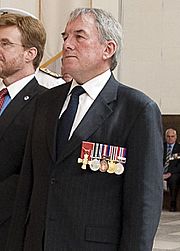 David Ledson, former chief of the Royal New Zealand Navy, wearing the badge for the Officer rank of the New Zealand Order of Merit.

The Queen of New Zealand awards honours on ministerial advice. However, certain awards remain in the exclusive gift of the Queen.

The Honours Unit of the Department of the Prime Minister and Cabinet administers the New Zealand honours system.

Since the beginning of settlement in the mid nineteenth century, British honours were awarded in New Zealand. In 1848, Governor George Grey received the first honour granted to a New Zealand resident, becoming a Knight Commander of the Order of the Bath.

For more than a hundred years the British honours system was used for New Zealand. In appropriate cases, this included peerages and baronetcies.

Bernard Freyberg, although not born in New Zealand and resident outside New Zealand for a considerable portion of his life, had significant connections with New Zealand, and was ennobled while serving as Governor-General of New Zealand in 1951. The current bearer of the title, Valerian Freyberg, 3rd Baron Freyberg, is based in the United Kingdom and is one of the 92 hereditary peers elected to sit in the House of Lords.

Arthur Porritt, a New Zealand-born physician, surgeon, statesman and athlete, became a baronet in 1963 and was appointed Governor-General of New Zealand in 1967 (the first person born in New Zealand to serve in this post), serving until 1972. He returned to England upon the expiry of his term as Governor-General, and was later ennobled in 1973. Porritt was resident in England at the time he was made a baronet and at the time he received his peerage. His son, Jonathon Porritt, is resident in England and is entitled to register his claim to his father's baronetcy (but not to his peerage, since it was a life peerage). He has so far declined to do so, however.

In 1996, Robin Cooke, a New Zealand judge, was awarded a life peerage. Following his ennoblement until his retirement at the age of 75, Lord Cooke sat in the British House of Lords as a Law Lord, and ex officio also in the Judicial Committee of the Privy Council, which at that time was the highest authority in the New Zealand judicial system. Lord Cooke is the only Commonwealth judge from outside Britain to have attained this distinction (Lord Atkin was born in Australia but only spent the first three years of his life there before returning permanently to England and Wales). The discontinuance of appeals to the Privy Council from New Zealand in 2003 (combined with the cessation of the judicial functions of the House of Lords since then) makes it unlikely that a similar honour will be granted in future on the strength of judicial services rendered in New Zealand.

In March 2009, Prime Minister John Key announced the restoration of knighthoods and damehoods to the New Zealand Honours system, with past recipients of the two highest grades of the New Zealand Order of Merit to be eligible to receive titles.

Orders and other honours

All content from Kiddle encyclopedia articles (including the article images and facts) can be freely used under Attribution-ShareAlike license, unless stated otherwise. Cite this article:
New Zealand Royal Honours System Facts for Kids. Kiddle Encyclopedia.