The Newcastle Police Stables on Clinton Street in Toodyay, Western Australia were constructed in 1891 and replaced the original timber stables erected on this site in 1860, which were destroyed by fire.

Timber stables were built on the site using convict labour in the 1860s. A fire that started in a dung heap destroyed those timber stables in 1890. The stables were replaced with a brick and stone structure designed by George Temple-Poole and built by James Hasell in 1891.

The present building is a single storey stone range with brick quoining and stone window dressings. It has a shallow pitched corrugated iron roof with gables. The façade facing the street is solid stonework with five small high level openings. The entrance to the building is at the rear.

The stables remained in use until 1955. Restoration of the building began in the 1970s and the stables are currently open as part of the Newcastle Old Gaol Museum complex. 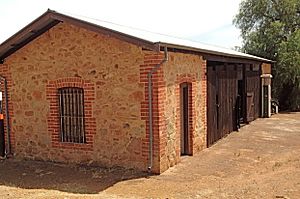 All content from Kiddle encyclopedia articles (including the article images and facts) can be freely used under Attribution-ShareAlike license, unless stated otherwise. Cite this article:
Newcastle Police Stables Facts for Kids. Kiddle Encyclopedia.