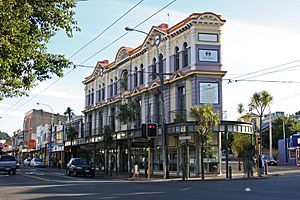 Originally a working-class suburb, Newtown has followed gentrification trends in recent years, attracting large numbers of immigrants, students and young professionals and resulting in an ethnically diverse population. The Wellington City Council District Plan identifies Newtown as a suburb with an "identifiable or distinct character". Because of Newtown's special character only one household units are allowed in certain areas. Resource consent is needed to put two or more household units on a site.

Features of the suburb

Government House on Rugby Street, Wellington Hospital located on Riddiford Street and Wellington Zoo all lie within the boundaries of Newtown. Newtown Park is located next to the Zoo, off Roy Street and provides a venue for athletics and football. The Park consists of a 400m all-weather running track, grandstand, changing rooms, community rooms and play area. Wellington City Council has spent $3.6 million on modernising facilities at Newtown Park to meet current and future needs for the athletics and soccer sports codes, and the wider community.

Newtown School is a state primary school located in the heart of the suburb. For more than 127 years, this school has educated the children of Newtown and its neighbouring suburbs. The school has a Maori immersion class – Ngati Kotahitanga – providing an 80 per cent immersion environment, an indoor heated swimming pool, computer suite, and separate junior and senior playgrounds. 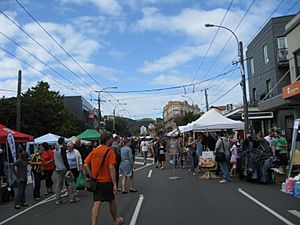 The Newtown Festival in 2010 (looking up Riddiford Street)

The annual Newtown Festival takes place over ten days, culminating in the Newtown Festival Street Fair which is usually held on International Children's Day (usually the first Sunday in March). Organised by The Newtown Residents' Association for the past 18 years, the festival has continued to grow. The 2014 Newtown Festival was attended by an estimated 80,000 people. In 2014 the Wellington Gold Awards nominated the organisers of the Newtown Festival for one of their annual awards, citing that the festival is "New Zealand’s largest free annual outdoor street festival."

All content from Kiddle encyclopedia articles (including the article images and facts) can be freely used under Attribution-ShareAlike license, unless stated otherwise. Cite this article:
Newtown, New Zealand Facts for Kids. Kiddle Encyclopedia.