The Niagara Fallsview Casino Resort (commonly known as Fallsview Casino) is a resort casino in Niagara Falls, Ontario, Canada. It opened publicly on June 10, 2004. The $1 billion complex overlooks the Horseshoe Falls and is one of the most prominent features of the Niagara skyline. The site was once the transformer station building for the Ontario Power Company at the foot of Horseshoe Falls. It was also occupied by the Canadian Pacific Railway Montrose Subdivision. The complex is owned by the Ontario Lottery and Gaming Corporation. As of June 2019, the casino's day-to-day operations are managed by Mohegan Gaming and Entertainment. 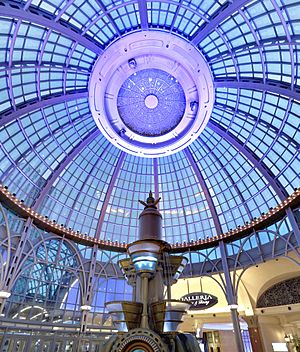 The east facade of the complex retains the walls of the terrace and front entrance of the transformer station built in 1904. The area where the transformers resided is now the Grand Hall convention halls.

At the main entrance is a water feature called 'The Teslatron'. During its first few years of functioning it featured nightly displays with added audio and lighting but over the past few years this has ceased. At street level there is a fountain that varies its height with the wind so as not to wet pedestrians and passing cars.

When players need to cash out their money from the Ticket-In, Ticket-Out slot machines, the player is given a bar-coded paper ticket. Tickets are referred to as TITO(s). Tickets are void after 90 days.

The casino has a 35-floor 374-room CAA/AAA Four Diamond hotel rising from above the casino complex.

All content from Kiddle encyclopedia articles (including the article images and facts) can be freely used under Attribution-ShareAlike license, unless stated otherwise. Cite this article:
Niagara Fallsview Casino Resort Facts for Kids. Kiddle Encyclopedia.