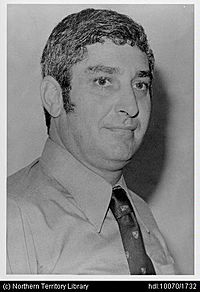 Nicholas Manuel Dondas AM (born 26 October 1939) is an Australian politician. He is a member of the Country Liberal Party. He represented the Division of Northern Territory in the House of Representatives from 1996 to 1998. He also served as a member of the Northern Territory Legislative Assembly for Casuarina from 1974 to 1994. He was the assembly's speaker from 1989 to 1994.

All content from Kiddle encyclopedia articles (including the article images and facts) can be freely used under Attribution-ShareAlike license, unless stated otherwise. Cite this article:
Nick Dondas Facts for Kids. Kiddle Encyclopedia.