Nick Rocks: Video to Go, usually shortened to Nick Rocks, was a music video television series that aired on American cable channel Nickelodeon from 1984 to 1989. It featured pop and rock music videos over a 30-minute timeframe, presented in a countdown format. The show was typically hosted by a man identified on-air as "Joe from Chicago". Most episodes feature Joe traveling to various locations to hear viewers request specific music videos. Several guest hosts were featured over the program's run, such as The Monkees and They Might Be Giants.

Music videos played on the show were decided using request letters sent in by viewers. In 1987, five to six thousand requests were received weekly. Many musical guests on Nick Rocks were also seen on Nickelodeon sister channel MTV at the time; according to Nickelodeon president Geraldine Laybourne, MTV executives assisted in finding talent for the program.

Nickelodeon staff distributed Nick Rocks merchandise, including buttons and decals, at the "Nick Night" event in 1984. 1990 issues of Nickelodeon Magazine, sold exclusively at Pizza Hut restaurants, featured pop culture quizzes based on rerunning Nick Rocks episodes. While Nick Rocks was never released on home video while running, an episode of Nick Rocks starring They Might Be Giants is included as a bonus feature on the DVD release of the band's 2003 film, Gigantic: A Tale of Two Johns. 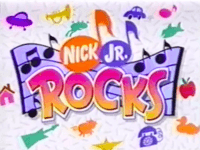 A spin-off geared towards preschool viewers, titled Nick Jr. Rocks, premiered as part of Nickelodeon's Nick Jr. block in October 1991. The series was produced by actress Shelley Duvall and initially ran for five minutes at a time. Differently from its predecessor, Nick Jr. Rocks featured original music videos created specifically for the program. According to a 1991 interview with Duvall, Nickelodeon offered her as much airtime as she wanted for the series; as a result, Nick Jr. Rocks had no permanent position on the network's lineup.

All content from Kiddle encyclopedia articles (including the article images and facts) can be freely used under Attribution-ShareAlike license, unless stated otherwise. Cite this article:
Nick Rocks Facts for Kids. Kiddle Encyclopedia.