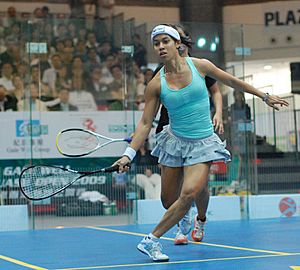 Nicol Ann David in action on the seventh day of the 2009 Hong Kong Open.

Nicol is the first squash player to have won the World Junior title twice; in 1999 and 2001. She was the only female squash player to have done this until in 2007. This was when Raneem El Weleily won her second World Junior Championship. Nicol joined WISPA and turned professional in 2000 when she won her first WISPA title, after only a month in the tour. The win came in February, when she beats Salma Shabana in the final of the Savcor Finnish Open. On June 7, 2008, Nicol David was recognized with the Order of Merit (Darjah Bakti) or D.B. in conjunction with the birthday of the His Majesty Tuanku Mizan Zainal Abidin. She was the first recipient of the award which was started on June 26, 1975. Nicol was also invited to carry the Olympic torch for Malaysia during the build up to the Athens Olympics in 2004 and being appointed as UNDP National Goodwill Ambassador for Malaysia.

All content from Kiddle encyclopedia articles (including the article images and facts) can be freely used under Attribution-ShareAlike license, unless stated otherwise. Cite this article:
Nicol David Facts for Kids. Kiddle Encyclopedia.