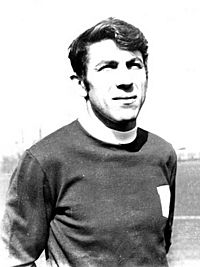 Nicolae Lupescu (17 December 1940 – 6 September 2017) was a Romanian football defender and manager. He was born in Bucharest, Romania. Lupescu earned 21 caps and scored 2 goals for the Romanian national team. He represented his country at the 1970 FIFA World Cup.

Lupescu died on 6 September 2017 of liver cancer in Bucharest at the age of 76.

All content from Kiddle encyclopedia articles (including the article images and facts) can be freely used under Attribution-ShareAlike license, unless stated otherwise. Cite this article:
Nicolae Lupescu Facts for Kids. Kiddle Encyclopedia.