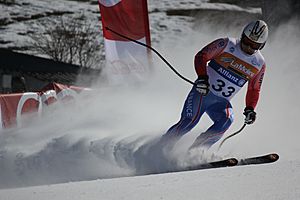 Nicolas Berejny (born 27 June 1968) is a skier from France. He has a disability. He skied at the 2011 IPC Alpine Skiing World Championships and was the first skier to finish in the visually impaired men's downhill race. He was the third skier to finish in the men's visually impaired Super-G race. Because he cannot see, Gregory Nouhaud was his guide and told him where to when going down the mountain.

All content from Kiddle encyclopedia articles (including the article images and facts) can be freely used under Attribution-ShareAlike license, unless stated otherwise. Cite this article:
Nicolas Berejny Facts for Kids. Kiddle Encyclopedia.