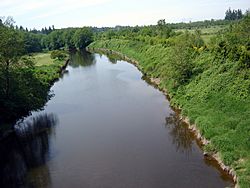 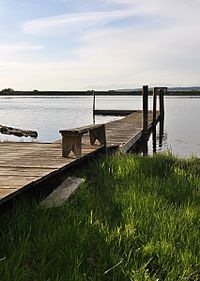 Pier on the river, close to the point where it enters Mud Bay

The Nicomekl River springs from the ground in Langley, British Columbia and travels west through the city to Surrey's Crescent Beach, where it empties into Mud Bay, the northernmost section of the Boundary Bay of the Strait of Georgia. It has a total length of 34 km, with a drainage area of 149 km2.

The word Nicomekl is from the Halq'emeylem used by the Stó:lō people, meaning "the route to go" or "the pathway." The Nicomekl (Katzie) people, descendants of Smakwec, were largely wiped out by a smallpox epidemic in the 18th century.

Smakwec and his people, originating from Point Roberts, and their history, lands, resources, and culture were closely linked to those of the Katzie people. The descendants of Smakwec and his people are many, but many have vanished. The Nicomekl, as a distinct people, vanished in the time of the 1862 Pacific Northwest smallpox epidemic. 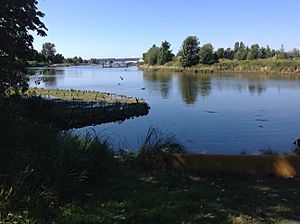 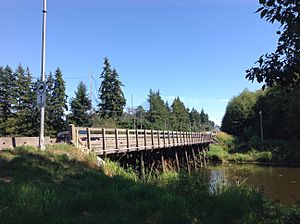 The river was first documented in writing on December 13, 1824, when James McMillan's Hudson's Bay Company expedition used the Nicomekl River to travel inland. They went up the Nikomekl to the portage area to the Salmon River which connected to the Fraser River 50 miles inland. McMillan built the first Fort Langley at that location two and a half years later. John Work, a clerk with the party, described the Nicomekl as thick with willows and with low banks "well wooded with pine, cedar, alder and some other trees." Work also noted signs of there being numerous beavers on the river.

Nicomekl was more navigable than other nearby rivers so was important to Surrey pioneers.

In 1911, Surrey council barred navigation up the Nicomekl and Serpentine rivers due to construction of dams to reclaim land. This ended use of the rivers by steamboats and log booms.

In December 1951, high tides up the Nicomekl and Serpentine rivers combined with gale-force winds to flood 490 hectares of farmland under 1.5 metres of salt water. Repairs cost about $20,000 and the salt residue affected farm production for a few years. In the 1960s, river pollution caused the closure of thriving oyster farming businesses.

Tributaries (listed from the mouth up)

All content from Kiddle encyclopedia articles (including the article images and facts) can be freely used under Attribution-ShareAlike license, unless stated otherwise. Cite this article:
Nicomekl River Facts for Kids. Kiddle Encyclopedia.