Nikolay Yegorovich Zhukovsky (Russian: Никола́й Его́рович Жуко́вский; IPA: [ʐʊˈkofskʲɪj]; January 17 [O.S. January 5] 1847 – March 17, 1921) was a Russian scientist, mathematician and engineer, and a founding father of modern aero- and hydrodynamics. Whereas contemporary scientists scoffed at the idea of human flight, Zhukovsky was the first to undertake the study of airflow. He is often called the Father of Russian Aviation.

The Joukowsky transform is named after him, while the fundamental aerodynamical theorem, the Kutta–Joukowski theorem, is named after both him and German mathematician Martin Kutta.

Zhukovsky was born in the village of Orekhovo, Vladimir Governorate, Russian Empire. In 1868, he graduated from Moscow University where he studied under August Davidov. From 1872, he was a professor at the Imperial Technical School. In 1904, he established the world's first Aerodynamic Institute in Kachino near Moscow. He was influenced by both Ernst Mach and his son Ludwig Mach. From 1918, he was the head of TsAGI (Central AeroHydroDynamics Institute). 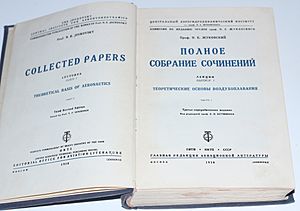 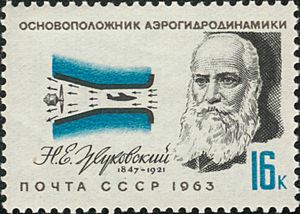 He was the first scientist to explain mathematically the origin of aerodynamic lift, through his circulation hypothesis, the first to establish that the lift force generated by a body moving through an ideal fluid is proportional to the velocity and the circulation around the body. He used a conformal mathematical transformation to define the ideal shape of the aerodynamic profile having as essential elements a rounded nose (leading edge), double surface (finite thickness), cambered or symmetrical, and a sharp tail (trailing edge). He built the first wind tunnel in Russia. He was also responsible for the eponymous water hammer equation used by civil engineers and the Joukowsky transform.

He published a derivation for the maximum energy obtainable from a turbine in 1920, at the same time as German scientist Albert Betz. This is known controversially as Betz's law, as this result was also derived by British scientist Frederick W. Lanchester. This is a famous example of Stigler's law of eponymy.

A city near Moscow and the crater Zhukovskiy on the Moon are both named in his honor.

The State Zhukovsky Prize was established in 1920 'for the best works in mathematics'.

The Russian Air Force's engineering academy was named for him, later reorganized into the Zhukovsky – Gagarin Air Force Academy. In May 2016, Moscow's fourth largest airport was named in his honor.

Mosfilm produced a 1950 eponymous biopic directed by Vsevolod Pudovkin with music by Vissarion Shebalin, which earned Pudovkin and Shebalin the USSR State Prize in 1951.

The Russian Central Aero-Hydrodynamic Institute and the Ukrainian National Aerospace University – Kharkiv Aviation Institute are named after him.

The Zhukovsky House is a museum dedicated to his memory

All content from Kiddle encyclopedia articles (including the article images and facts) can be freely used under Attribution-ShareAlike license, unless stated otherwise. Cite this article:
Nikolay Zhukovsky (scientist) Facts for Kids. Kiddle Encyclopedia.