Exaggerated contrast between edges of the slightly differing shades of gray, appears as soon as they touch

Ernst Waldfried Josef Wenzel Mach ( 18 February 1838 – 19 February 1916) was an Austrian physicist and philosopher, noted for his contributions to physics such as study of shock waves. The ratio of one's speed to that of sound is named the Mach number in his honor. As a philosopher of science, he was a major influence on logical positivism and American pragmatism. Through his criticism of Newton's theories of space and time, he foreshadowed Einstein's theory of relativity.

In 1898 Mach suffered from cardiac arrest and in 1901 retired from the University of Vienna and was appointed to the upper chamber of the Austrian parliament. On leaving Vienna in 1913 he moved to his son's home in Vaterstetten, near Munich, where he continued writing and corresponding until his death in 1916, only one day after his 78th birthday.

Ernst Waldfried Josef Wenzel Mach was born in Chrlice (German: Chirlitz), Moravia (then in the Austrian empire, now part of Brno in the Czech Republic). His father, who had graduated from Charles University in Prague, acted as tutor to the noble Brethon family in Zlín in eastern Moravia. His grandfather, Wenzl Lanhaus, an administrator of the Chirlitz estate, was also master builder of the streets there. His activities in that field later influenced the theoretical work of Ernst Mach. Some sources give Mach's birthplace as Tuřany (German: Turas, now also part of Brno), the site of the Chirlitz registry-office. It was there that Ernst Mach was baptized by Peregrin Weiss. Mach later became a socialist and an atheist. His theory and life, though, was sometimes compared with Buddhism, namely by Heinrich Gomperz who addressed Mach as the "Buddha of Science" due to the phenomenalist approach of the "Ego" in his Analysis of Sensations. 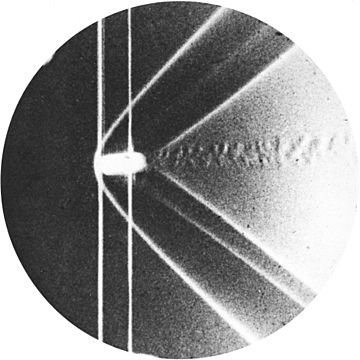 Up to the age of 14, Mach received his education at home from his parents. He then entered a Gymnasium in Kroměříž (German: Kremsier), where he studied for three years. In 1855 he became a student at the University of Vienna. There he studied physics and for one semester medical physiology, receiving his doctorate in physics in 1860 under Andreas von Ettingshausen with a thesis titled "Über elektrische Ladungen und Induktion", and his habilitation the following year. His early work focused on the Doppler effect in optics and acoustics. In 1864 he took a job as Professor of Mathematics at the University of Graz, having turned down the position of a chair in surgery at the University of Salzburg to do so, and in 1866 he was appointed as Professor of Physics. During that period, Mach continued his work in psycho-physics and in sensory perception. In 1867, he took the chair of Experimental Physics at the Charles University, Prague, where he stayed for 28 years before returning to Vienna.

Mach's main contribution to physics involved his description and photographs of spark shock-waves and then ballistic shock-waves.

He described how when a bullet or shell moved faster than the speed of sound, it created a compression of air in front of it.

One of the best-known of Mach's ideas is the so-called "Mach principle," concerning the physical origin of inertia. This was never written down by Mach, but was given a graphic verbal form, attributed by Philipp Frank to Mach himself, as, "When the subway jerks, it's the fixed stars that throw you down." 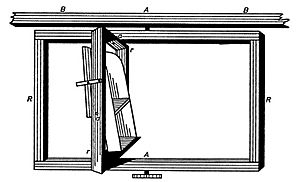 Spinning chair devised by Mach to investigate the experience of motion 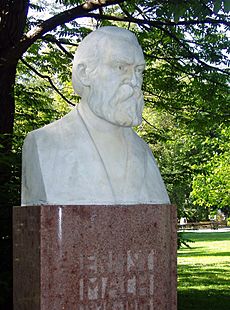 Bust of Mach in the Rathauspark (City Hall Park) in Vienna, Austria

Most of Mach's initial studies in the field of experimental physics concentrated on the interference, diffraction, polarization and refraction of light in different media under external influences. From there followed important explorations in the field of supersonic fluid mechanics. Mach and physicist-photographer Peter Salcher presented their paper on this subject in 1887; it correctly describes the sound effects observed during the supersonic motion of a projectile. They deduced and experimentally confirmed the existence of a shock wave of conical shape, with the projectile at the apex. The ratio of the speed of a fluid to the local speed of sound vp/vs is now called the Mach number. It is a critical parameter in the description of high-speed fluid movement in aerodynamics and hydrodynamics. Mach also contributed to cosmology the hypothesis known as Mach's principle.

To Mach are attributed a number of principles that distill his ideal of physical theorisation—what is now called "Machian physics":

The last is singled out, particularly by Albert Einstein, as "the" Mach's principle.

Einstein cited it as one of the three principles underlying general relativity. In 1930, he stated that "it is justified to consider Mach as the precursor of the general theory of relativity", though Mach, before his death, would apparently reject Einstein's theory. Einstein was aware that his theories did not fulfill all Mach's principles, and no subsequent theory has either, despite considerable effort.

In homage his name was given to:

All content from Kiddle encyclopedia articles (including the article images and facts) can be freely used under Attribution-ShareAlike license, unless stated otherwise. Cite this article:
Ernst Mach Facts for Kids. Kiddle Encyclopedia.