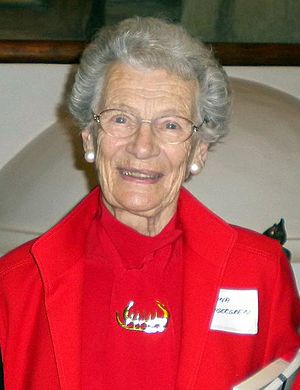 Nina Viveka Maria Lagergren (née von Dardel; 3 March 1921 – 5 April 2019) was a Swedish businesswoman. She was the half-sister of Raoul Wallenberg. She was known for her trying to find out what happened to him after his disappearance. She was the founder of the Raoul Wallenberg Academy. She also presented the radio program Sommar i P1 in 2014.

Lagergren was born in Stockholm. She was married to Gunnar Lagergren from 1943 until his death in 2008. The couple had four children. Their oldest daughter, Nane, was the married to Kofi Annan, the 7th Secretary-General of the United Nations.

Lagergren died on 5 April 2019 in Djursholm, Danderyd Municipality. She was 98.

All content from Kiddle encyclopedia articles (including the article images and facts) can be freely used under Attribution-ShareAlike license, unless stated otherwise. Cite this article:
Nina Lagergren Facts for Kids. Kiddle Encyclopedia.