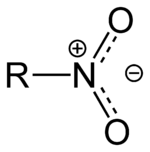 The structure of the nitro group

A nitro compound is a molecule that has the nitro group. The nitro group is made of one nitrogen atom connected with two oxygen atoms (-NO2). The nitrogen is also bonded to the rest of the molecule.

Nitrogen normally has only three bonds. In a nitro group, the bond is considered positively charged. Then one bond of the oxygen is negatively charged, and the other has a double bond. In reality, the best way to represent the nitro group is to consider it to have delocalized electrons. Then all three atoms are sp2 hybridised

Nitro compounds are very explosive. This is because, at high temperature, nitro compounds can decompose and release nitrogen gas. This reaction is very exothermic (gives out a lot of energy). Many explosives have nitro groups, for example trinitrotoluene (TNT).

All content from Kiddle encyclopedia articles (including the article images and facts) can be freely used under Attribution-ShareAlike license, unless stated otherwise. Cite this article:
Nitro compound Facts for Kids. Kiddle Encyclopedia.