Normansville is a hamlet in the town of Bethlehem and a neighborhood in the city of Albany, Albany County, New York. The entire area was one hamlet in Bethlehem until the portion north of the Normans Kill was annexed by Albany in 1916. The Delaware Turnpike once ran through both neighborhoods until 1929 with the construction of a new much higher, longer, and wider Delaware Avenue Bridge over the Normans Kill. This allowed commuters to and from Albany to bypass both Normansvilles. The original lower bridge still stands, though it has been closed to vehicular traffic since January 1990.

Normansville was originally called Upper Hollow for the deep ravine carved by the Normans Kill that the unincorporated village sits in. Further downstream was Lower Hollow, later named Kenwood. Upper Hollow had its start with the construction of the Delaware Turnpike in 1805 which went from the city of Albany to Otego (which then was part of Delaware County). At the Normans Kill (kill is Dutch for stream) the road was carried by a 100-foot-long (30 m) wooden bridge and northwest of this bridge was a toll-gate. This bridge was washed away by a freshet in 1869. This was the year after the turnpike company had abandoned the road and so the town of Bethlehem built an iron bridge in its place.

Soon after the turnpike was constructed taverns and various industries began to spring up to take advantage of the power that could be harnessed from the Normans Kill's waters. Among the industries were cloth mills and saw mills, several of these mills were swept aside by the same freshet that washed away the bridge, they were quickly rebuilt but by the beginning of the 20th century the mills were abandoned. Another major industry along the Normans Kill was that of cutting ice blocks from the creek during the winter and storing it for shipping to New York City and other locations for use in iceboxes. The Pappalau Ice House on the Albany side was one of many ice houses along the Normans Kill and Hudson River at the end of the 1800s, by 1920 it too would be abandoned as new technologies made the industry obsolete.

In 1916, Albany annexed much of the town of Bethlehem up to the Normans Kill. This included that portion of the hamlet of Normansville north of the creek. Prior to this annexation the children of Normansville attended a small school, Bethlehem District Number 11 in Normansville on the Delaware Turnpike. After the annexation those children in Albany attended the city schools, and the children remaining in Bethlehem continued to attend school in District 11. Due to the annexation and the loss of a large amount of the taxable land, the district was consolidated into neighboring District Number 7 in 1919.

In the 1980s, several changes occurred to the sleepy hamlet, especially on the Bethlehem side. In 1986, the original yellow brick turnpike road was paved over, the yellow bricks were first pulled up and saved though. Rockefeller Road, the main street on the Bethlehem side, was the main route south out of the hamlet and connected to Kenwood Avenue by way of a bridge built in 1914 over the now-abandoned Delaware and Hudson Railroad tracks. In 1987, the town closed the Rockefeller Road Bridge due to safety concerns, this was supported by the Normansville Neighborhood Association to remove the traffic that used Rockefeller Road as a shortcut between Kenwood and Delaware avenues. In January 1990, the older Normans Kill bridge was closed to vehicular traffic, and since then the two Normansvilles have had little exchange even though pedestrian travel over the bridge is still possible. Since then Old Delaware Avenue to Delaware Avenue is the only way in and out of Bethlehem's Normansville.

In 1886 the hamlet, (including both sides of the Normans Kill) had roughly 100 individuals, 22 families, and 17 dwellings. Over 100 years later in 1993, it was estimated that the hamlet on the Bethlehem side consisted of 50 people, 19 homes, and one church.

Normansville lies within and along the banks of a ravine. This ravine was carved by the Normans Kill, a creek and tributary of the Hudson River that forms the border between the city of Albany to the north and the town of Bethlehem to the south. The ravine is of clay banks with the creek flowing over a bed of slate. 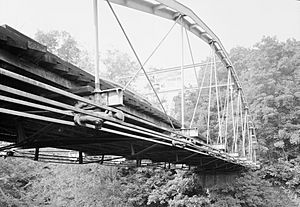 Whipple truss bridge at the Steven's Farm. It is on the National Register of Historic Places

All content from Kiddle encyclopedia articles (including the article images and facts) can be freely used under Attribution-ShareAlike license, unless stated otherwise. Cite this article:
Normansville, New York Facts for Kids. Kiddle Encyclopedia.