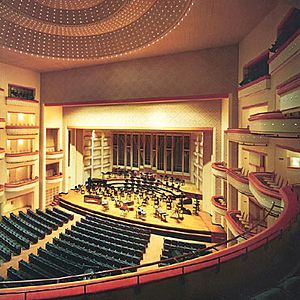 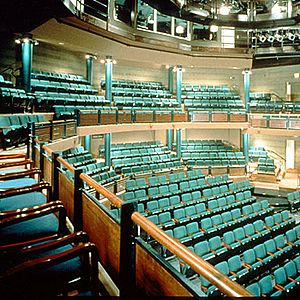 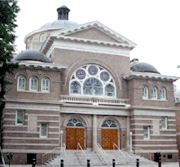 Blumenthal Performing Arts (also NC Blumenthal Center and NCBPAC) is located in Charlotte, North Carolina. It opened in 1992 and is named in honor of the people of the state of North Carolina and the Blumenthal Foundation established by I.D. Blumenthal who founded RSC Brands, the largest private donor to the capital campaign. The idea for the center dates back to the late 1970s. Momentum for the project grew in the 1980s resulting in a $15 million allocation from the state of North Carolina, approval of a $15 million bond by the citizens of Charlotte and an additional $32 million contributed by individuals, corporations and foundations. In 1987 the Belk Brothers donated a valuable piece of land as the site of the new theatre complex. Total construction cost for the Blumenthal Center was over $62 million.

The Blumenthal Center and the adjacent Founder's Hall and Bank of America corporate center were all designed by César Pelli and Associates. Acoustical design was completed by acoustical consultant Kirkegaard Associates. Project management was provided by Theatre Project Consultants (TPC). General contractor on the project was Becon Construction of Charlotte, NC.

Although the Blumenthal Center as a company has six theaters under its management, the Belk Theater, Booth Playhouse, and Stage Door Theater are physically part of the Blumenthal Performing Arts Center. The McGlohon Theatre and Duke Power Theatre are both contained in the Spirit Square facility. The Knight Theater is located in close proximity to the Center. The Blumenthal also presents shows at Ovens Auditorium.

The Belk Theater is the largest venue in the North Carolina Blumenthal Performing Arts Center, seating 2,118 at its full-capacity configuration. It features state-of-the-art equipment, production and support capabilities and can host any event - from grand opera to rock to corporate annual meetings and lectures. The theater is designed in a contemporary European horseshoe arrangement for an intimate atmosphere and world-class acoustics. The most distant seat is less than 135 feet from the stage. A hallmark of the theater's design is some 2,400 "points of light" in the audience chamber, part of a dazzling fiber optic network with multi-color capabilities.

The Booth Playhouse of the North Carolina Blumenthal Performing Arts Center is a courtyard-style proscenium theater with cabaret and theater-in-the-round capabilities. This intimate theater contains 434 seats with seating in orchestra and gallery levels. It hosts a variety of dance, choral and other musical ensembles, as well as meetings, seminars, and workshops.

The intimate Stage Door Theater is a new entertainment hot spot on Charlotte’s North College Street. Seats up to 211 in a flexible configuration. Entrance is near the corner of College and 5th Street.

Seating capacity of 1,193. Part of the Levine Center for the Arts on Tryon at Levine Ave of the Arts. Adjacent to the new Bechtler Museum of Modern Art.

The McGlohon Theatre at Spirit Square Center for Arts & Education seats 716 and is a showplace for local and national performances. Opened in 1980, this intimate space was the former First Baptist Church. With its stained glass windows and Byzantine dome, this historically designated space makes each event a unique experience. The McGlohon Theatre comprises two levels: the Orchestra (stage) Level and the Balcony Level.

The Duke Energy Theater is a black box theater and has stained glass windows and hardwood floors.

Ovens Auditorium is owned and operated by the Charlotte Regional Visitors Authority (CRVA) of the City of Charlotte. The facility seats more than 2,400 and is located at 2700 East Independence Boulevard.

The Blumenthal Performing Arts Center hosts Broadway productions through the PNC Broadway Lights Series. The 2015/16 PNC Broadway Lights series includes: The Sound of Music, Matilda the Musical, Beautiful: The Carole King Musical, The Bridges of Madison County, The Wizard of Oz, If/Then, First Date, and Cabaret. The Blumenthal Center also features the PNC Broadway Extras, which includes Motown the Musical, Beauty and the Beast, Ragtime, the Hip Hop Nutcracker, Kinky Boots, The Book of Mormon, Once, Stomp, and the Blue Man Group.

Since opening its doors in 1992, 7.3 million people have attended an event, performance, activity or meeting at the Center & Spirit Square. The Center infused $52.25 million into the economy during the 2007-2008 season.

NCBPAC is currently home to 6 different resident companies (between the Blumenthal Center complex and Spirit Square) whose goals include visual and performing arts as well as education. The Duke Power Theatre and the McGlohon Theatre also host annual productions by Charlotte Shakespeare.

All content from Kiddle encyclopedia articles (including the article images and facts) can be freely used under Attribution-ShareAlike license, unless stated otherwise. Cite this article:
North Carolina Blumenthal Performing Arts Center Facts for Kids. Kiddle Encyclopedia.