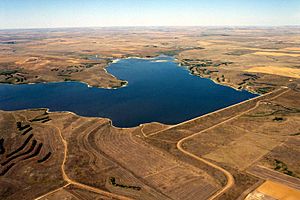 Bowman-Haley Dam and Lake on the North Fork of the Grand River in Bowman County, North Dakota

It rises in the Badlands of southwestern North Dakota, in southern Bowman County, and flows ESE, into the Bowman-Haley Reservoir, formed by the Bowman-Haley Dam, then through northwestern South Dakota, past several units of the Grand River National Grassland in northern Perkins County. It joins the South Fork near Shadehill to form the Grand.

All content from Kiddle encyclopedia articles (including the article images and facts) can be freely used under Attribution-ShareAlike license, unless stated otherwise. Cite this article:
North Fork Grand River Facts for Kids. Kiddle Encyclopedia.