The Grand River (Lakota: Čhaŋšúška Wakpá) is a tributary of the Missouri River in South Dakota in the United States. The length of the combined branch is 110 mi (177 km). With its longest fork, its length is approximately 200 mi (320 km). 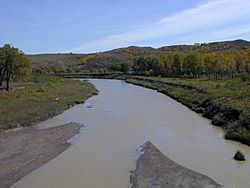 The Grand River near Little Eagle 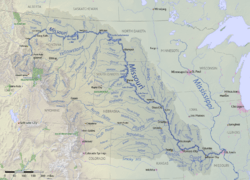 The Grand River shown as a tributary of the Missouri River

It is formed by the confluence of the North Fork (which rises in North Dakota) and the longer South Fork (which rises in South Dakota) in northwestern South Dakota near Shadehill in Perkins County, near several parcels of the Grand River National Grassland. Shadehill Reservoir is located at this confluence. It flows east, through the Standing Rock Indian Reservation and joins the Missouri in Lake Oahe, approximately 2 mi (16 km) northwest of Mobridge. The lower 15 mi (25 km) of the river form an arm of the Lake Oahe reservoir. It is the northernmost of South Dakota's major West River streams: the Grand, Moreau, Cheyenne, Bad, and White. Draining about 5,200 square miles (13,000 km2) of the northern plateaus of the state, the Grand receives most of its water from snowmelt. Water quality is high in sodium, and is therefore less appropriate for irrigation. At Wakpala, the river has a mean annual discharge of 275 cubic feet per second (7.8 cubic metres per second)

Sitting Bull (1831–1890), a Hunkpapa Lakota holy man who led his people as a tribal chief, was born on the Grand River in or nearby Dakota Territory. Decades later, he was killed by Indian agency police on the Standing Rock Indian Agency at his camp near the Grand River, as the police tried to arrest him.

The forks of the Grand was the site of a noted 1823 attack by a grizzly bear on frontiersman Hugh Glass.

All content from Kiddle encyclopedia articles (including the article images and facts) can be freely used under Attribution-ShareAlike license, unless stated otherwise. Cite this article:
Grand River (South Dakota) Facts for Kids. Kiddle Encyclopedia.