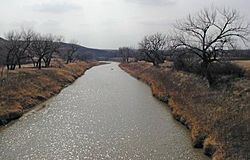 The Moreau River at Whitehorse 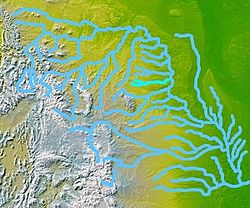 The Moreau River, highlighted on a map of the Missouri River watershed

The Moreau River is a tributary of the Missouri River, approximately 200 miles (320 km) long, in South Dakota in the United States. Moreau River has the name of a pioneer trader.

It rises in two forks in northwestern South Dakota, in the Badlands of Butte and Harding Counties. The North Fork rises approximately 10 miles (16 km) northeast of Crow Buttes. The South Fork rises approximately 20 miles (32 km) west of the headwaters of the North Fork. The two forks flow ESE and unite near Zeona in southern Perkins County. The combined stream flows east, past Usta, and across the Cheyenne River Indian Reservation, past Iron Lightning, Thunder Butte, Green Grass and Whitehorse. It joins the Missouri in Lake Oahe, with the lower 25 miles (40 km) of the river forming an arm of the reservoir.

The river generally parallels its neighbor 40 miles (64 km) to the north, the Grand River, running from west to east to join the Missouri. Draining the Pierre Hills and Northern Plateaus, the Moreau (formerly Owl River) has a drainage basin of approximately 5,400 square miles (14,000 km2). The Moreau River also has Sand Creek as a source, along with the North and South Forks, and claims several tributaries, such as the Little Moreau, Deep, Red Earth, Antelope, and Thunder Butte Rivers. At Promise, the river averages a flow of 296 cubic feet per second (8.4 cubic metres per second).

All content from Kiddle encyclopedia articles (including the article images and facts) can be freely used under Attribution-ShareAlike license, unless stated otherwise. Cite this article:
Moreau River (South Dakota) Facts for Kids. Kiddle Encyclopedia.