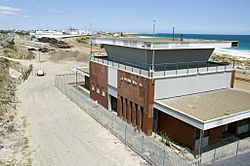 North Fremantle is a suburb of Perth, Western Australia, located within the City of Fremantle. Its postcode is 6159.

North Fremantle is situated on a peninsula, with the Indian Ocean bounding the west side and the Swan River the east side. On the north side it is separated from the suburb of Mosman Park by McCabe Street. North Fremantle has one train station located on Stirling Highway. It provides train services into Fremantle and Perth City. Various bus stations can be found in North Fremantle providing access to outer Perth suburbs.

The suburb was once the site of Western Australian Government Railways Leighton Marshalling Yards, which linked the North Fremantle industrial area and North Quay.

The area is now being redveloped by the state government.

The Swan river on the border of North Fremantle, holds great significance to the Aboriginal community who call the river “Derbal Yaragan”.

All content from Kiddle encyclopedia articles (including the article images and facts) can be freely used under Attribution-ShareAlike license, unless stated otherwise. Cite this article:
North Fremantle, Western Australia Facts for Kids. Kiddle Encyclopedia.